Greece has an extensive history in the global shipping industry. An emphasis on maritime dominance has been present in the region since the 5th century BC. With more than 1,000 islands, the modern Greek shipping industry began to grow around the 19th century.

At that time, trading families began to purchase or build vessels that would allow them to transport goods to Northern Europe. As opportunities began to increase, they began to provide freight services for other families and businesses as well. The modern industry now contains some of the world’s largest bulk carriers and tankers.

Three key factors have helped to maintain consistent levels of growth for the Greek shipping industry: location, low taxation, and a vision for the future.

#1. The number of Greek-controlled vessels within the global shipping sector rose in 2017 to a total of 4,092 vessels that exceeded 1,000 gross tonnage. (International Trade Administration)

#2. Shipping is second only to tourism for its importance to the economics of Greece. In 2017, it was responsible for about 7% of the GDP for the country. More than 190,000 people are directly employed through the Greek shipping industry. (International Trade Administration) 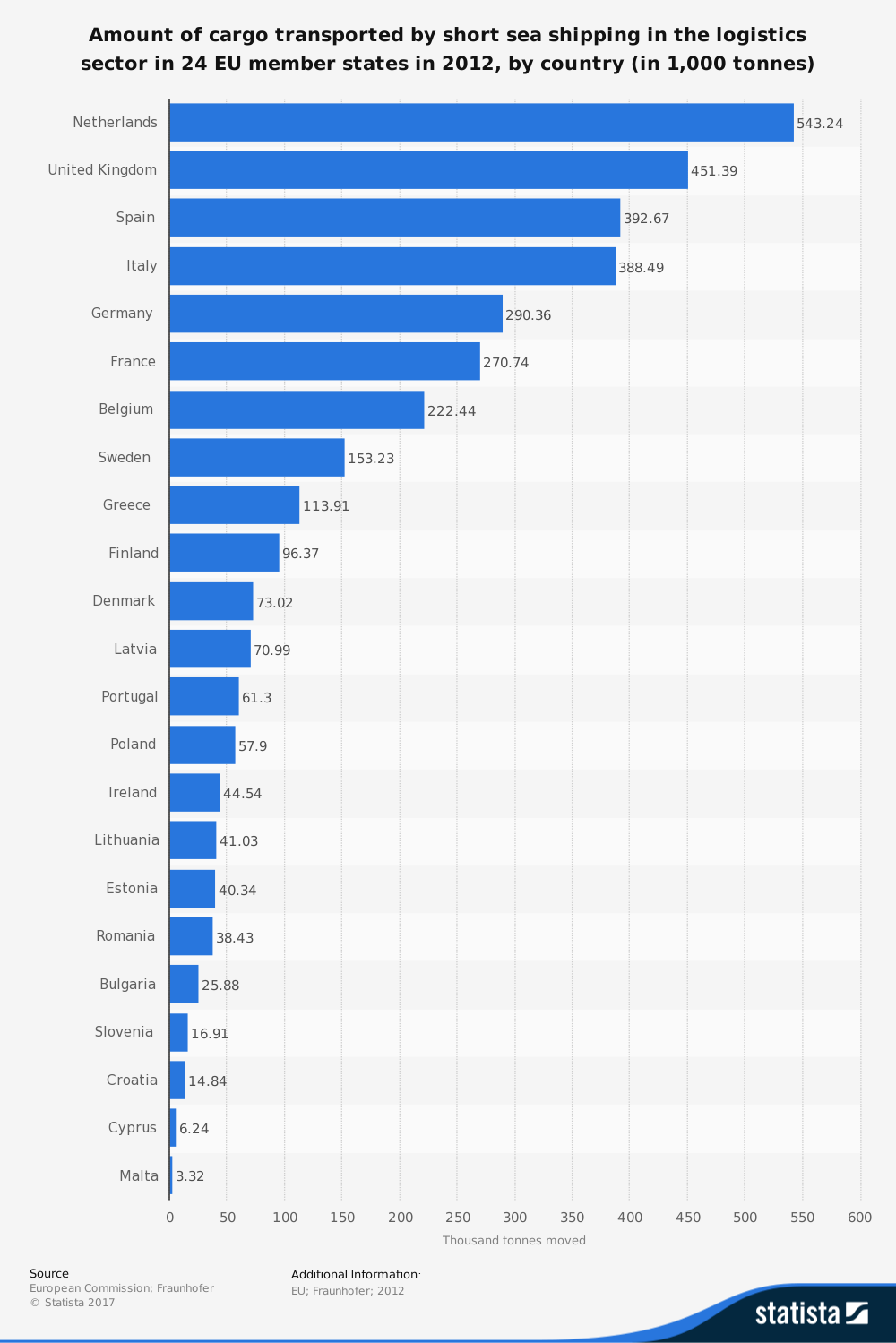 #3. The Greek flag fleet is ranked fifth in the world in DWT and the largest in the European Union. In total ship numbers, it is the largest merchant marine fleet currently operating in the world today. (International Trade Administration)

#4. Greek ships are currently registered under 40 different national flags right now. 18% of vessels around the world, operating in the shipping industry, currently fly the Greek flag. The most popular foreign flag flown by Greek ships comes from the Marshal Islands, with 74f lying those colors. (International Trade Administration)

#5. In the past year, Greek shipping industry vessels that flew the colors of Greece lost a total of 62 ships over the course of the year. (International Trade Administration)

#7. The total value of the Greek shipping industry is about $9 billion annually on its own. When related business is included within the industry, the value jumps to $17 billion per year. (Reuters)
#8. Deep-sea shipping from Greece, and its related trades, are responsible for 4% of all Greek employment in any given year. (Reuters)

#9. If Greece only counted payments to Greek companies and individuals instead of all monies generated that may never enter the economy, the total contribution by the Greek shipping industry would be closer to 1%. (Reuters) 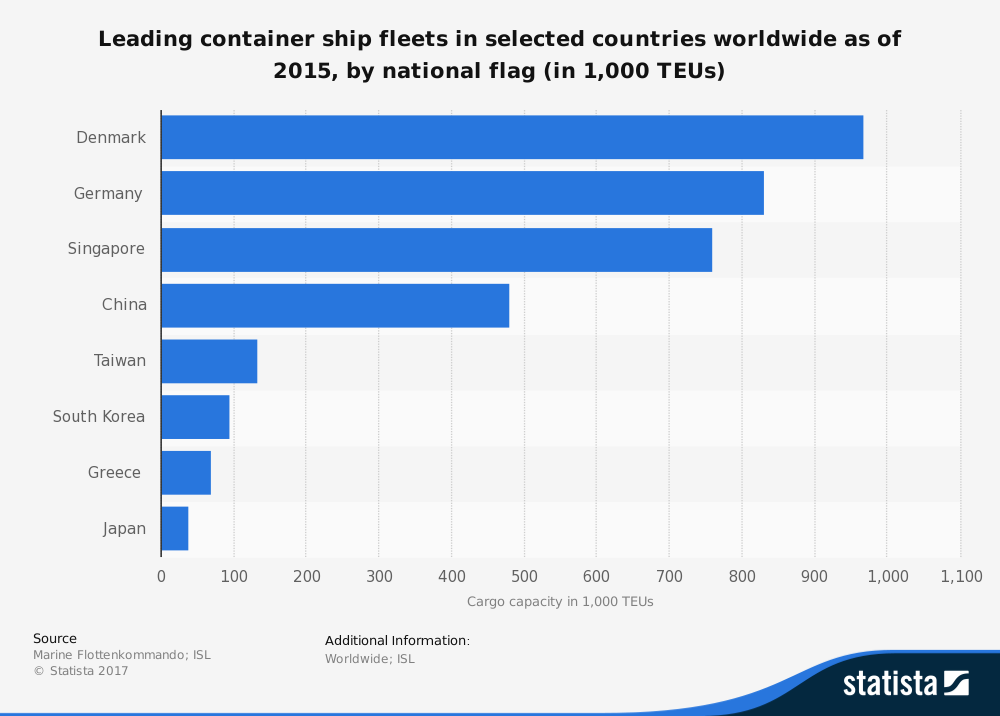 #11. As of April 2014, new shipbuilding orders by Greek owners totaled 495 vessels. That was about 10% of the world’s total order book. From that number, 222 of them were bulkers, or more than 13% of the world’s bulker tonnage on order. (Eurobank)

#12. About 48% of the Greek fleet is composed of ore and bulk carriers. Oil tankers make up another 34.6% of the fleet. Products tankers (7.2%) and container ships (6.35%) are the other two large segments of the fleet in terms of DWT. (Hellenic Shipping News)

#14. The Middle East saw the largest levels of port activity growth from Greek fleets in port, rising by over 3% from 2010-2014. At the same time, European ports saw a sharp drop in activity, declining from 26% of global activities to 19.3% of global activities during the same period. (Hellenic Shipping News)

#15. In a September 2016 survey of merchant ships 100 GRT and over, 139 of them were laid-up ships, while 1,041 were currently listed as being active. (Hellenic Statistical Authority)

#16. About 800 Greek seamen were employed on Greek-owned ships that were flying under a foreign flag in 2016. For Greek ships flying different colors, about 1 out of every 3 workers on the ship comes from a foreign nationality. (Hellenic Statistical Authority)

#19. The total value of the Greek fleet within the shipping industry has an estimated value of $84 billion. (Vice News)

#20. When evaluated as part of the European Union shipping industry, Greece is responsible for 36% of the total gross tonnage. Germany comes in second, with 21% of gross tonnage. (Oxford Economics)

Many owners within the Greek shipping industry have claimed that they are too large to be taxed. They have threatened to withdraw their ships from Greece, which the industry claims would have a largely negative impact on the Greek economy.

This happened after World War II. Several owners withdrew their ships when a levy on shipping companies was introduced. In 1953, the government conceded and put in tax breaks for ship owners directly into the Greek constitution. Taxes on incomes were exempted.

The end result of these structures is an uncertain future. Greece has been strapped for cash for nearly a decade. Through austerity measures, the government was able to generate some aid. As this happened, the shipping industry continued to benefit from their unique tax position.

The Greek shipping industry remains one of the largest in the world. The figures may be overstated, in some ways, to make the industry look more important than it is. That doesn’t change the fact that the industry continues to dominate global trade on the world’s waters.