Garlic was first introduced to the United States in the 18th century. Within the garlic industry, you’ll find three different types of products are typically sold: certified seeds, fresh garlic, and dehydrated garlic. In present day, the United States garlic crop totals 511.5 million pounds. Most of the garlic sold in the U.S. originates from Gilroy, California, but the industry as a whole covers the entire country and most of the world. California harvested 33,000 acres with the average yield per acre of 155 cwt in 2017. The United States is the world’s largest import market for fresh garlic with China accounting for the majority of US imports. Other top supplies are Mexico and Spain.

#1. The average person will consume about 2 pounds of garlic every year because of its flavor and ability to lower cholesterol and blood pressure levels. (Agricultural Marketing Resource Center)

#2. In 2013, the total garlic crop was about 3.9 million cwt for the United States. That is quite far behind the top producer of garlic in the world, which is China. In 2012, the Chinese produced 409 million cwt of garlic. (Agricultural Marketing Resource Center) 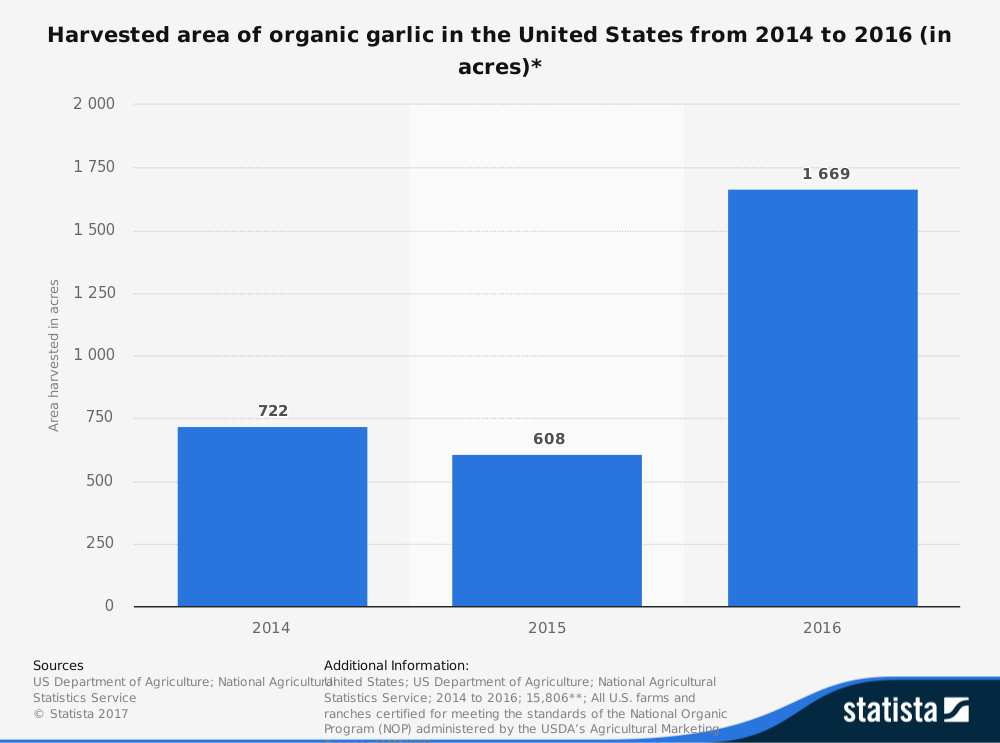 #7. Most of the garlic that is grown in the United States comes from California. The state leads in fresh and dehydrated product markets. Only 5 states harvest more than 100 acres of garlic annually, with California leading the way. The other states are Nevada, New York, Oregon, and Washington. (U.S. Department of Agriculture)

#8. Three counties in California provide almost the entire crop of garlic that is consumed annually. Fresno County leads the way, producing 82% of the garlic crop. They are followed by Kern Country (11%) and Monterey Country (5%). (U.S. Department of Agriculture)

#9. Garlic is the only major agricultural commodity in the U.S. to have seen production doubled over each 10-year period. No vegetable, including carrots, broccoli, or onions, have offered the same levels of strong growth. (U.S. Department of Agriculture)

#10. Although there are an estimated 600 different varieties of garlic used around the world, there is a strong believe that many varieties are actually duplicates. There is no official garlic registry and a virus can make the same garlic appear in many different forms. (See California) 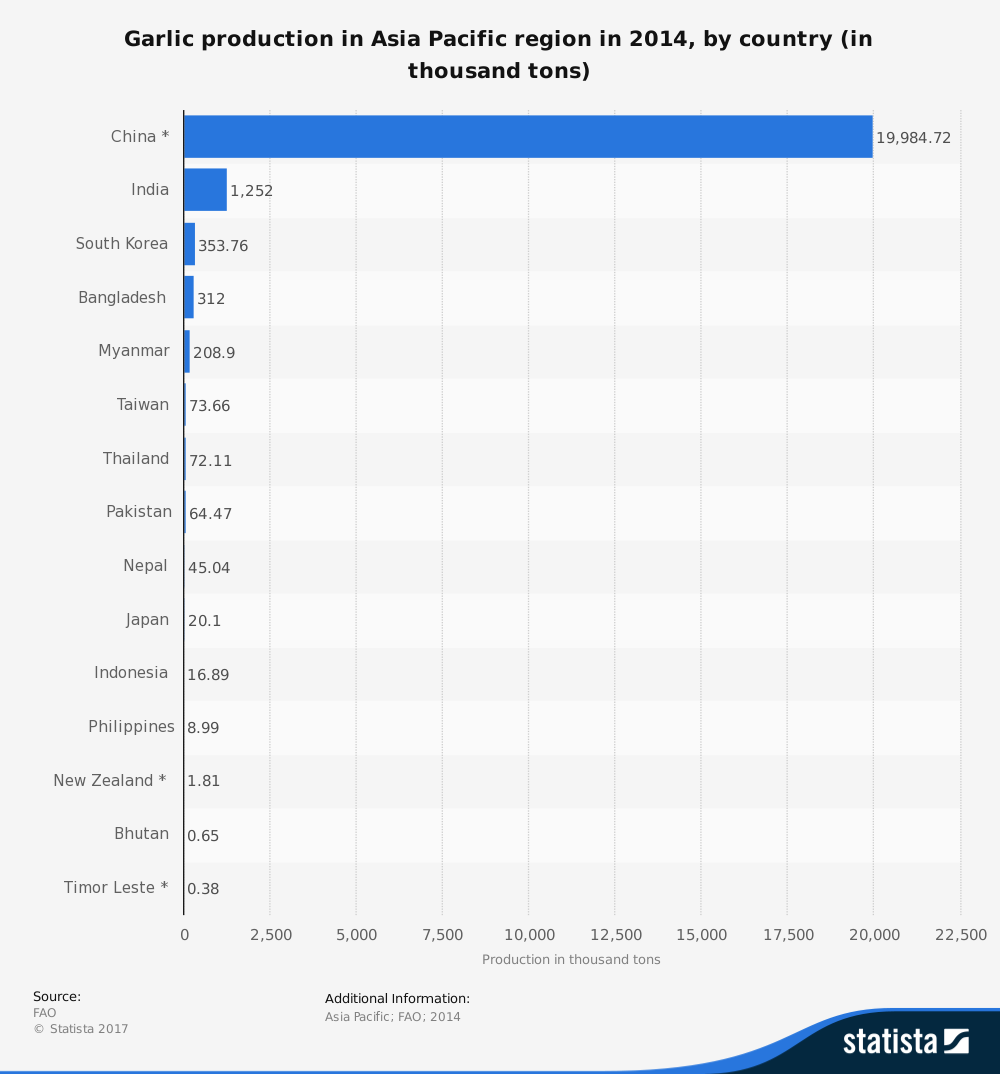 #11. There are two primary types of garlic: softneck and hardneck. Most commercial garlic is softneck, with 25% of the crop sold in grocery stores and the remainder becoming a dehydrated product. (See California)

#12. Christopher Ranch is the largest grower of garlic in the United States. Each year, they produce over 50% of the total nationwide garlic crop. (See California)

#13. Garlic requires heavy fertilization to achieve results that are suitable for commercial products. In total 150 pounds of potassium, 150 pounds of phosphorus, and 125 pounds of nitrogen are required per acre. (Penn State University)

#14. In the U.S. the average garlic grower uses one acre of land or less for their growing needs. To enter into the market, an initial capital investment of just $17,000, and perhaps less is necessary. (Penn State University)

#15. Prices for garlic can vary greatly. In a grocery store, garlic typically sells for about $2 per pound. If the garlic product is certified organic, then the price may be as high as $5 per pound. For specialty varieties, some garlic bulbs may sell for $1 or more each. (Penn State University)

#16. In the United States, pyrethroids are the primary pesticides used to control thrips in garlic. Resistance to this pesticide has led to a 20% drop in control from 1995-2000, the last year reliable data has been released. (IPM Centers)

#17. About 40% of the acres that are dedicated to garlic growth receive at least one pesticide treatment per year. (IPM Centers)

#18. The easiest way to tell what type of garlic is being purchased is to look at the roots of the bulb. American growers do not remove the roots, but imported garlic products typically do remove the roots from the garlic. (Diet of Life) 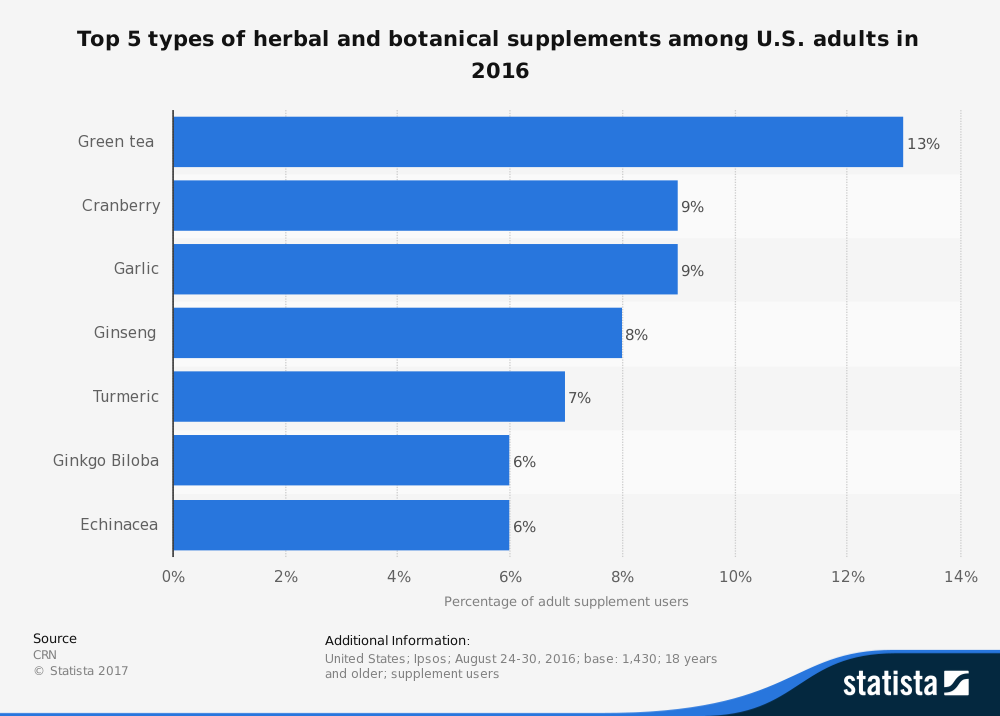 #21. For most soils, there is a minimum of 2.5cm of water per week required during the growing season for garlic. If the soil is sand-based, up to 5cm of water per week may be needed, especially in dry or hot weather. (Ontario Ministry of Agriculture, Food, and Rural Affairs)

The garlic industry is well-established and continues to grow faster than other agricultural products. Although the United States only produces about 1% of the crop when compared to China, there are strong indicators that production rates may rise in the near future.

Many agricultural businesses, including small family farms, are looking for new ways to earn revenue. With such a limited footprint for garlic in the U.S., with over half of the production centered on a single farm, there is a lot of local potential for this product.At the same time, the centralized nature of the garlic industry brings about a lot of risk. If something happens to that one farm in California, the domestic crop will be dramatically reduced and would face an immediate and difficult recovery period.