Unrefined petroleum is referred to as crude oil. It is a liquid found within our planet which occurs naturally. It can be colored from a light yellow to a dark black, and may contain trace amounts of metal, organic compounds, and other contaminants. Depending upon the quality of the crude oil and the extraction method use to obtain it, hydrocarbon counts may be as low as 50%, or as high as 97%.

Organic compounds will usually be 10% or less of the crude oil liquids, with oxygen, sulfur, and nitrogen the most common found. Trace metals, such as iron, nickel, and copper, are usually less than 1% of the crude oil composition.

#2. Saudi Arabia is currently ranked as the #1 producer of oil in the Middle East. Over 47% of the global oil reserves which are proven are located in this region. (Statista) 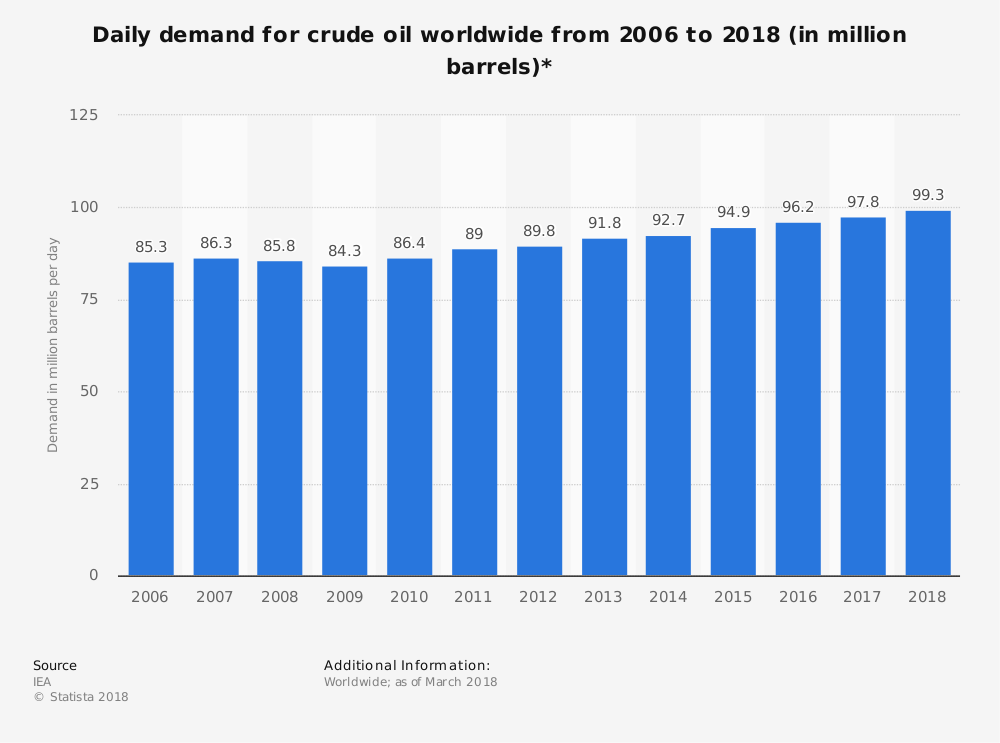 #3. Venezuela is home to over 17% of the world’s provable oil reserves right now. That makes it the richest single country with provable reserves, with an estimated 300 billion barrels currently available. (Statista)

#9. China is the second-largest consumer of oil in the world, averaging more than 13 million barrels per day. (U.S. Energy Information Administration)

#10. More than 9.2 million barrels of gasoline are consumed in the United States every day, which equates to about 390 million gallons. Over the past 36 months, fuel consumption in the U.S. has reached record or near-record levels. (U.S. Energy Information Administration)

#11. In 2016, gasoline in the United States was responsible for 47% of the crude oil demand. (U.S. Energy Information Administration)

#12. 1 out of 3 American drivers said that their driving habits changed in 2017. 34% of them said that they were driving more than they year before. (National Association of Convenience Stores)

#13. 78% of American drivers say that they spend less than 60 minutes per day in their vehicles. About 9% of drivers say they spend 90+ minutes driving each day. (National Association of Convenience Stores)

#14. In 2017, the average household in the United States spent about $2,450 on gasoline. Based on the median income in the U.S., that means people spend over 4% of their income to purchase fuel. (U.S. Census Bureau)

#15. The average household in the United States consumes more than 1,000 gallons of fuel each year. Almost 60% of those fuel expenditures are for transportation needs. (University of Michigan)

#16. Over 240 million gallons of used oil is consumed by the crude oil industry each year in the form of motor oil being sold at convenience stores. (U.S. Library of Congress)

#18. Canada is the top provider of crude oil imports to the U.S. market, accounting for 40% of the total incoming volume. They are followed by Saudi Arabia (9%), Mexico (7%), and Venezuela (7%). (U.S. Energy Information Administration)

#19. Mexico is the leading importer of U.S.-based crude oil products, accounting for 17% of the industry’s total exports by volume. Canada is second at 13%, followed by China (7%), Brazil (6%), and Japan (6%). (U.S. Energy Information Administration)

#21. Total crude oil imports to Europe were more than 553 million tons, with Russia providing over 150 million tons as the top provider. (Eurostat)

The crude oil industry always seems like it is facing a deadline. If no future crude oil reserves are found, then the current supply of provable reserves will be depleted by the year 2039. For more than a generation, the industry has faced a similar 30-year deadline, but continued to find new reserves to use.

It is the price of oil that is more concerning than its availability right now. For some countries, the break-even price of a barrel of oil is more than $50. When oil prices go lower than this, it costs more to extract oil than it will fetch in revenues. To counter this issue, the top producing nations may choose to artificially limit the supply of oil to stabilize the price, which affects fuel prices around the world.

Almost every country on our planet depends on the crude oil industry. Because it is a finite resource, alternatives may one day need to be explored. For now and in the short-term future, however, this industry will continue to thrive, much like it has always done.