Citrus fruits are produced by shrubs and trees that are found in the Rutaceae family. The origin of citrus is believed to be in either Southern Asia or in the South Pacific. Since ancient times, the citrus industry has existed in one form or another. Some citrus can be used for medical purposes as well. Eating citrus regularly, for example, is associated with a 10% risk reduction in the formation of breast cancer.

Traditionally, five countries have led the way in total production for the global citrus industry: China, Brazil, Mexico, India, Spain, and the United States. Citrus-growing areas are usually restricted to coastal areas. The Gulf of Mexico and the Mediterranean are two of the largest growing regions in the world today. 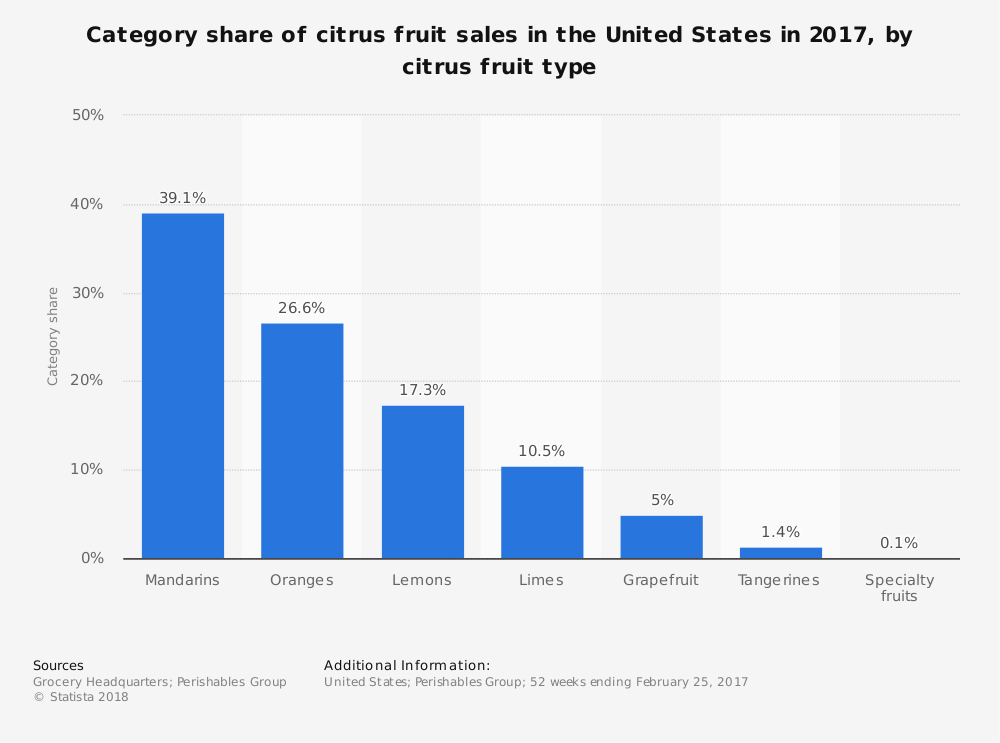 #4. Florida grapefruit production for the 2016-2017 season was down 28% from the year before, totaling just 7.76 million boxes. (U.S. Department of Agriculture)

#5. The total acreage dedicated to citrus production in Florida decreased by 24,600 acres in the 2016-2017 growing season. The state’s total acreage now stands at just over 410,000 acres. (U.S. Department of Agriculture)

#6. Despite the declines in total production, the value of the U.S. citrus crop for the 2016-2017 growing season increased to $3.44 billion. The higher values were led by stronger demand for mandarin, tangelos, and tangerines, which saw overall product rise by 15%. Lemon production was up by 2% over the previous growing season as well. (U.S. Department of Agriculture)

#8. Global orange juice production is expected to fall 16% for the 2017-2018 growing season, to a total of 1.7 million metric tons. Production in the United States is expected to decrease by 97,000 tons, despite a 10% rise in imports. (U.S. Department of Agriculture)

#10. In Florida, the citrus industry generates about 45,000 direct and indirect employment opportunities annually. That creates an economic impact of $8.6 billion each year for the state, with 12 processing plants and 22 packing houses active for the industry. (Florida Citrus Mutual) 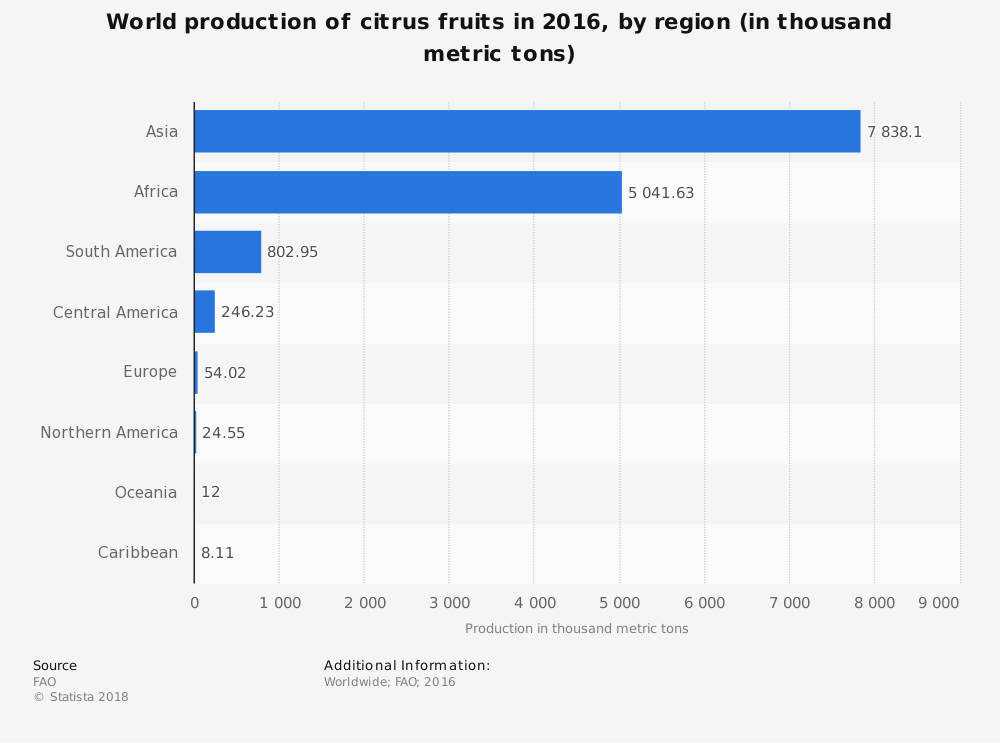 #11. About 6 million bushel cartons are exported from Florida each year. These cartons weigh about 45 pounds each. Canada is the largest importer of Florida oranges and specialty citrus. Japan receives the most grapefruit exports from Florida. (Florida Citrus Mutual)

#12. Florida products 56% of the total U.S.-based citrus crop for the industry. California produces another 41% of the crop. Arizona and Texas are the next two largest growing regions in the country, responsible for the remaining 3% of the industry. (Agricultural Marketing Resource Center)

#13. Two-thirds of the oranges that reach the U.S. domestic market originate in Florida. 62% of grapefruits that Americans consume come from Florida as well. (Agricultural Marketing Resource Center)

#14. California is the country’s largest producer of lemons, accounting for more than 90% of the domestic market. The state also provides 88% of the nation’s tangerine production. (Agricultural Marketing Resource Center)

#15. Almost 3 out of every 4 oranges grown in the United States is processed in some way. (Agricultural Marketing Resource Center)

#16. Oranges are the most popular citrus fruit consumed in the United States. Lemons are the second-most popular, followed by grapefruit, tangerines, and limes. The average consumer in the U.S. will eat nearly 80 pounds of citrus over the course of a year. (Agricultural Marketing Resource Center)

#17. Fresh orange consumption in the U.S. is just over 9 pounds per person. In comparison, the average American will consume almost 50 pounds of orange juice. (Agricultural Marketing Resource Center)

#18. 40% of the citrus industry in South Africa is dedicated to Valencia oranges. Navel oranges make up another 23% of the domestic crop. (Citrus Growers’ Association of Southern Africa)

#19. Limpopo is the most productive province in South Africa, responsible for 42% of the overall crop for the citrus industry. The Eastern Cape contributes another 26% of the overall harvest. (Citrus Growers’ Association of Southern Africa)

#20. Over 500 hectares are planted for soft citrus products in South Africa, which is the largest proportion of acreage for the industry. Soft citrus, however, is just 14% of the overall market in the country. (Citrus Growers’ Association of Southern Africa) 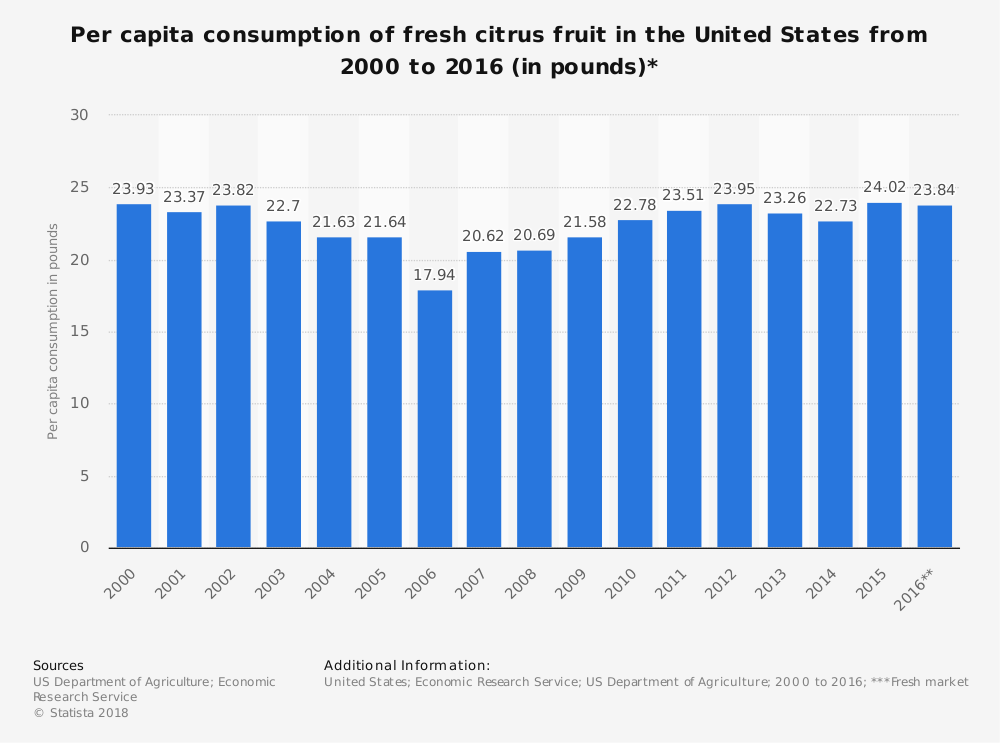 #21. Orange exports from South Africa have steadily risen since the 2006 growing season. More than 1 million tons of oranges are designated for export each year. Another 160,000 tons of soft citrus is exported as well, following the 10-year trend in rising exports. (Citrus Growers’ Association of Southern Africa)

After the record growing season of 1997-1998, the citrus industry has experienced a 20-year downward trend. The forecasts for the industry indicate that this trend will continue. Hurricanes in the Gulf of Mexico, combined with greening disease in Florida that causes fruit to drop before it ripens, has some forecasts showing the industry may lose more than 20% of its total production in the next year.

Unfavorable weather in South America is affecting the industry as well, with forecasts in Brazil calling for a contraction of up to 15%.

Only China is expected to see a large increase in production value in the coming years, thanks to a pattern of favorable weather in the region. Forecasts for Turkey and South Africa are slightly positive.

Consumption of citrus is down slightly over previous years as well. When combined with the weather-related challenges of this industry, most growing markets will see difficult conditions headed their way in the next 5 years.