In the UK, a majority of British consumers report that they drink tea on a daily basis. Tea drinking has moved away from an afternoon event to something that happens in the early morning hours. Many consumers will either drink their tea with or without milk, with both options about equal in popularity.

According to revenue figures released in 2015, the UK tea industry held a total market value of GBP 450.7 million for black tea products. Another GBP 78.8 million was sold in fruit and herbal teas, with GBP 46.1 million sold in specialty teas.

There is a lot of pressure on the UK tea industry, however, as consumers are beginning to transition over to coffee products. Although nearly half of consumers in the UK still drink 1-2 cups of tea per day, the percentages of those who drink 1 or fewer cups of tea is on the rise.

#2. Black tea is the most popular in the UK, accounting for 70% of the varieties consumed daily. Herbal and spice teas are the next popular, at 36%, while green tea (34%) and instant tea (17%) follow behind. (Mintel) 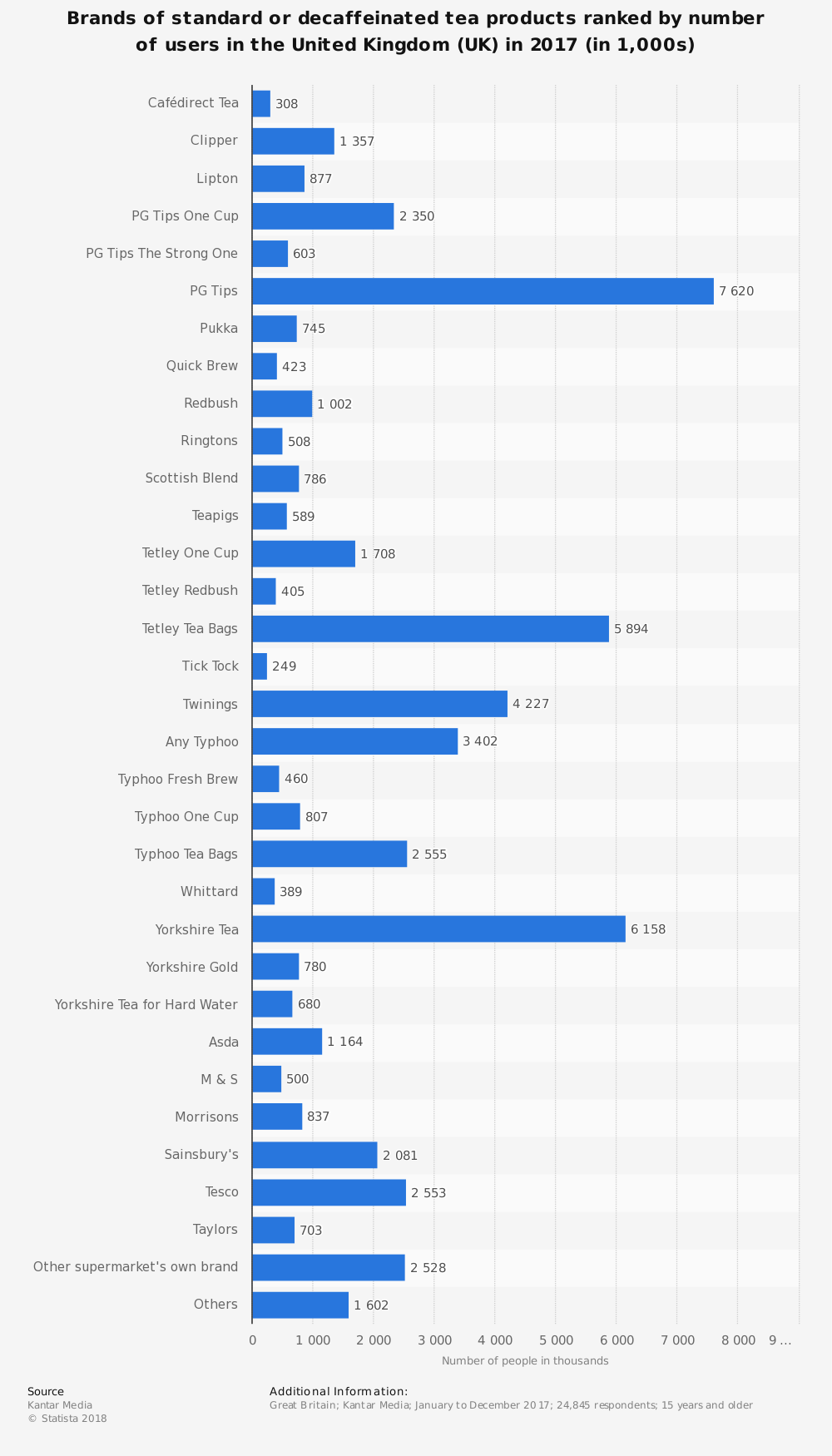 #3. 40% of people in the 16-34 age demographic say that they’d be interested in knowing how to pair UK teas with savory food items. For the general population, 28% of people have a similar interest. (Mintel)

#4. 18% of young tea drinkers say that they’d be interested in trying tea crystals, which is 3 times higher than those in the 55+ age demographic. (Mintel)

#5. 52% of older consumers say that they drink a standard black tea once per day, if not less, with 55% saying that they prefer the flavor of coffee over tea. (Mintel)

#6. The average consumer in the UK will use about 2kg of tea over the course of a year. That translates to an average revenue per capital of about GBP 18 per year, a 1.6% increase from the year before. (Statista)

#7. 96% of the tea products which are sold in the UK is sold in teabags. More than half of the black tea that is consumed in the country is produced in Eastern Africa, with Kenya being the top supplier. (Ministry of Foreign Affairs)

#9. 73% of the tea that is imported to the UK each year originated from a developing country. Kenya is responsible for 37% of the total tea imports each year. India (14%), Malawi (6.6%), and Tanzania (3.2%) are also considered major contributors. (CBI Market Intelligence)

#10. Green tea accounts for about 4% of the total imports to the UK tea industry each year. 39% of the green tea that is consumed originated from China, followed by India at 20%, then Indonesia at 9.3%. (CBI Market Intelligence) 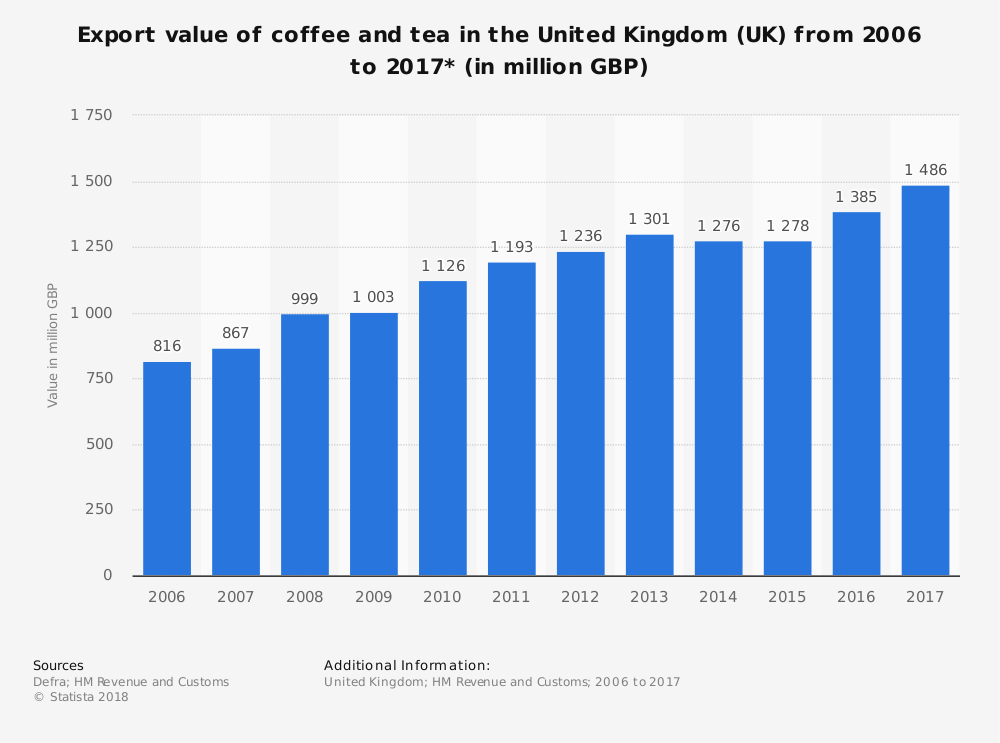 #11. The UK also exports about 21,000 tons of tea each year to other countries, which contributes GBP 110 million to the economy each year. Since 2010, however, the total volume of exports has decreased by 9.3% each year. (CBI Market Intelligence)

#12. 57% of the tea exports from the UK involved trade within Europe, with Ireland being the primary destination. UK tea is sold in Ireland as Lyons tea. Canada provides another 20% of the export market. (CBI Market Intelligence)

#13. About half of the tea that is consumed in Europe is either processed or consumed in the UK. More than 165 million cups of tea are consumed every day. (UK Tea and Infusions Association)

#14. The value of tea within the UK food service market increased by 13.6% from 2015-2017, even with a growing preference for coffee and having tea at home. (Tata Global Beverages)

#17. 34% of consumers who drink tea in their home regularly do not consume tea outside of the home. (Tata Global Beverages)

#18. Women are more likely than men to drink tea, representing 56% of consumer sales. The average household income of someone drinking tea in the UK is GBP 45,000, compared to GBP 36,000 for non-tea drinkers. (Tata Global Beverages)

#19. 49% of UK consumers who have seen a new type of tea have decided to try a different brand at least once within the past year. Only 15% of consumer say that they expect to drink more black tea in the coming year than they did in the previous year. (Tata Global Beverages)

#20. Green tea is the most popular non-black blend sold out of the home, representing 18% of the UK tea industry. Specialty black teas come in a close second at 17%. (Tata Global Beverages) 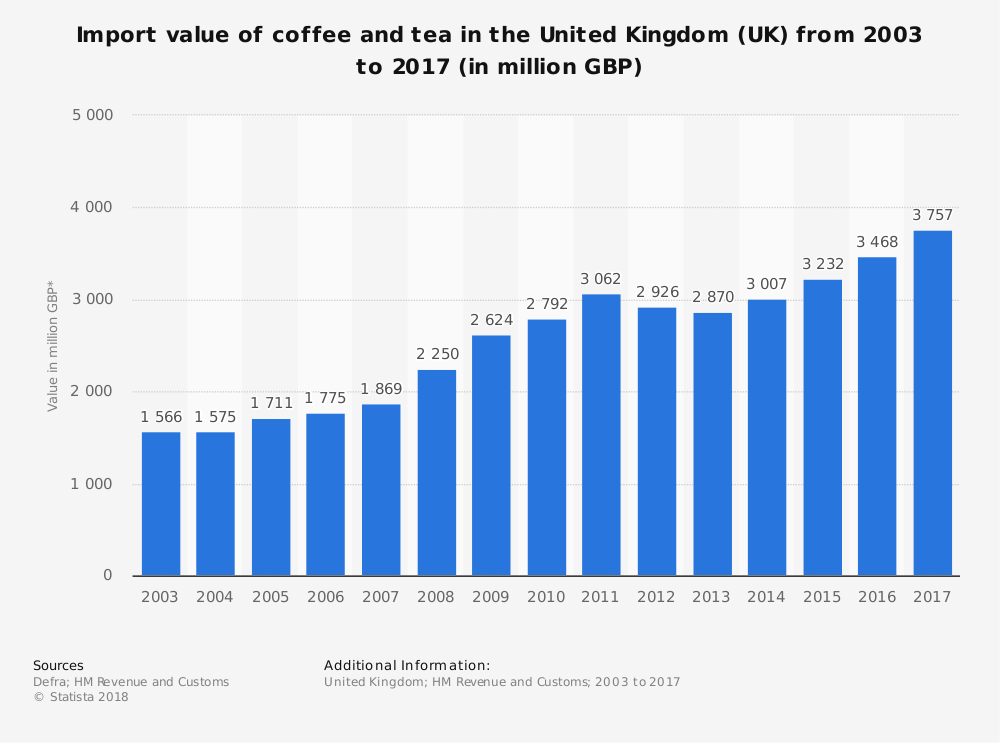 Although the tea industry is facing pressure from a variety of different beverages, most notably coffee, there is still some room for growth within the industry. Through the year 2021, the average growth rate for the industry is forecast to be around 2%.

What is responsible for this pattern of growth isn’t the standard black tea. It is a growing trend of enjoying fruit and herbal teas from those who are wanting to be more conscious about their health. Since 2012, the sale of standard black tea bags has fallen by 13%, while the sale of specialty teas has increased by 50% and green tea sales have improved by 50%.

Tea will always be part of the identity and culture of the UK. The tea industry there is on secure footing. As the industry identifies changing consumer preferences and adapts to them, the market should remain strong. Uncertainty about Brexit, along with changing relationships with the United States and EU-member nations, could affect the export industry somewhat.

Otherwise, the industry should continue to see slow and steady growth in the coming years.