The success of plastics began in the early 20th century. We can find plastics in toys, furniture, and even in plumbing systems in homes. Up to 20% of a modern automobile may even be made of plastic. One of the leading manufacturers of plastic products in the world today is Taiwan. The industry received a major boost in the 1990s when plastics were encouraged to reduce costs and the risks of certain diseases from spreading.

Just a decade later, however, the Taiwan plastics industry saw immediate declines when government officials saw how much waste was being produced. Since then, the recycling industry has played a major role in the industry as well. The United States is the fourth largest importer of Taiwan Plastics accounting for just 4.5%. Japan, China, and Germany are the top three importers, sharing over 78% of total imported value.

Here are some interesting statistics about the Taiwan plastics industry in its current form.

#1. The import value of the Taiwan plastics industry is over $250 million each year. The total value of the exports produced by the industry is $17.6 billion, or about 6.3% of the total exports market for the nation. (World’s Top Exports)

#2. To encourage the use of disposable dishes to prevent the spread of hepatitis, the government of Taiwan encouraged plastic use beginning in the 1990s. Since then, about 59,000 tons of garbage has been produced by the plastics industry each year. (Environmental Research Foundation) 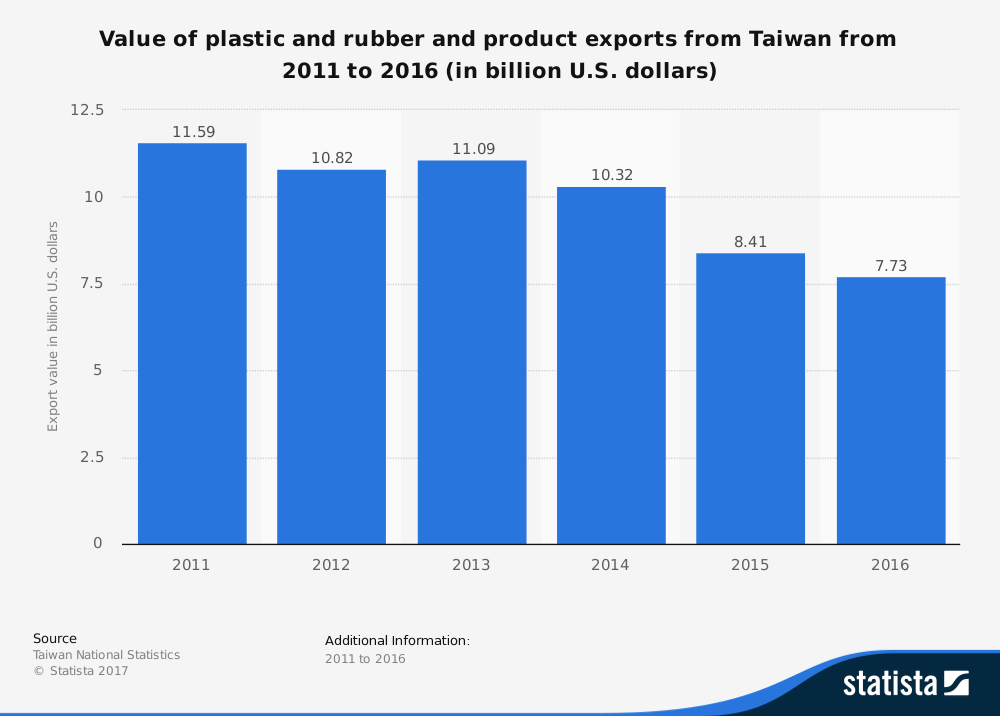 #3. The number of recycling companies in Taiwan has grown to over 1,600, up from about 100 in the 1990s. Recyclers have earned more than $2.2 billion in revenues each year, contributing to the Taiwan plastics industry. (Plastics Technology Online)

#4. In 2014, more than 180,000 tons of used plastic was collected by the Taiwan plastics industry and converted into new raw materials that were worth $140 million. (Plastics Technology Online)

#5. The plastics industry as seen declines in imports and exports in recent years. In 2013, for example, the industry experienced a total decline of nearly 12%. (Republic of China National Statistics)

#7. Since 2002, a plastic bag levy has been in place from the Taiwanese government. This has helped to reduce plastic bag use by more than 59%, accounting for some of the reductions the industry has experience. More than 8,500 tons of plastic bags are recycled every year as well. (The News Lens)

#10. To diversify the export market, the Taiwan plastics industry has sought out new customers. In 2015, sales to the United States rose by more than 67%, reaching $83.5 million. (Plastics News) 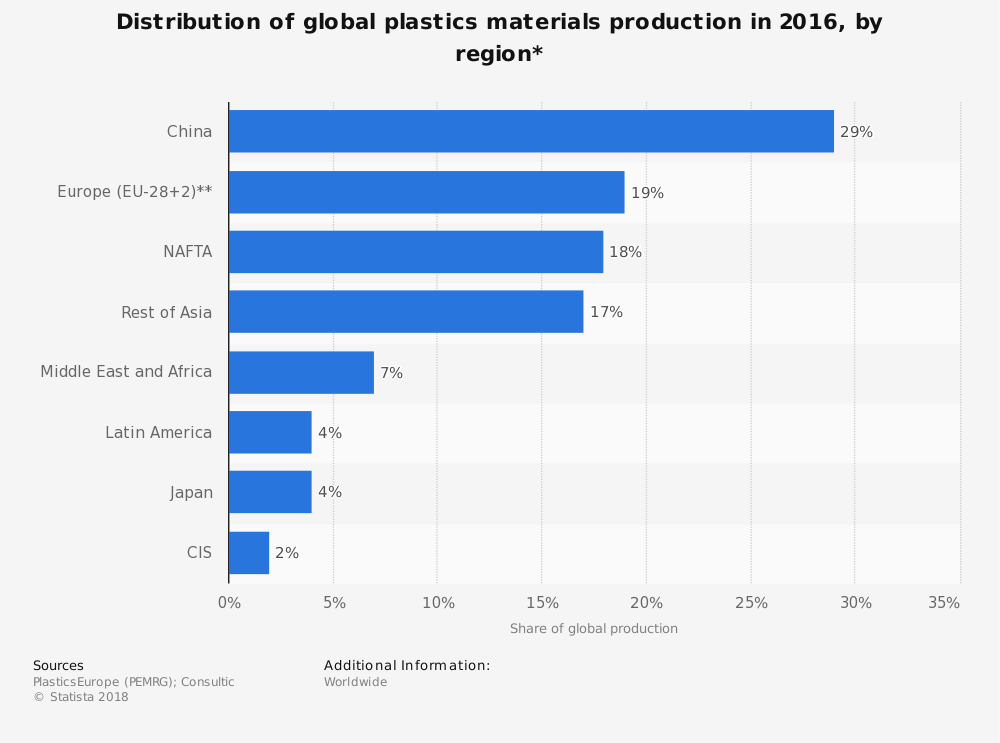 #11. Formosa Plastics is one the largest producers in the world today. In 2014, it achieved sales of $37 billion, making it the sixth-leading company of its type in the world. Although this figure was off 2.2% from the previous year, only 4 out of the top 10 companies saw a positive increase in sales. (Chemical and Engineering News)

#12. The Taiwan plastics industry receives a majority of its imports from Japan. Over 40% of total imports, with a value of more than $176 million, came from Japan in 2012. This was a nearly 30% drop in the total value of imports from the year before. (Taiwan Association of Machinery Industry)

#13. The total value of imports in 2012 was 23.3% lower compared to 2011 figures, the last years where reliable data has been released. (Taiwan Association of Machinery Industry)

#14. Plastics imports from Malaysia grew dramatically in 2012, with a 790% change over 2011 figures. The industry also imported 162% more plastics from Italy over the year before. (Taiwan Association of Machinery Industry)

#15. The Taiwan plastics industry remains competitive with the manufacturing of plastic injection molding machines. The industry produced about 2,500 more machines than Japan in 2012 at a price that was up to 4 times higher. (Plastics Today)

#16. Taiwan continues to the be the fourth-largest exporter of plastics in the world today. About 80% of the exported categories include the plastic injection molding machines. (Plastics Today)

#17. Half of the plastics that are produced by the Taiwan plastics industry is intended for single use, despite the increase in recycling within the industry. (Plastic Oceans)

#18. About 8 million tons of plastic is believed to be dumped into the world’s oceans every year, with the Taiwan plastics industry being a major contributor due to its status as a major exporter of the product. (Plastic Oceans)

#19. About 40% of total plastic usage is dedicated to packaging. For plastic bags, that means the product has an average working life of about 15 minutes. (Plastic Oceans)

#20. 14% of all litter comes from beverage containers and that figure does not include the plastics involved in the creation of product labels or container caps. (Plastic Oceans)

The trend to use plastics as a disposable item is continuing to be evaluated around the world. Yet, at the same time, a majority of packaging materials are still composed of plastic materials. That means the Taiwan plastics industry must remain adaptable to the demands of domestic and foreign societies if it can return to the massive gains it saw more than two decades ago.

The primary customer of Taiwan for plastics exports is China, so their economic slowdown has also made a major impact on local suppliers. If economic reductions are encouraged in China for a long period, then the Taiwan plastics industry will need to look for alternative export markets.

On the whole, the industry is mature and established. Domestic demands will remain constant. Outside of China, global exports have remained constant as well. That means future growth may once again be on the horizon for the Taiwan plastics industry.