What makes the U.S. pork industry unique is that the hogs and pigs are allowed to roam, often raised in homesteads, or they are kept in intensive commercial units. Over 100 million hogs are slaughtered each year in the United States as a food source. That gives the industry in the U.S. a total production value of more than $24 billion.

In the U.S., Iowa is the leading producer of hogs and pigs, with a live weight production of more than 12 billion pounds. About 72 million hogs and pigs are believed to be living in the United States at any given time.

In total, the pig industry oversees over 769 million animals that may one day be used as a food resource.

#2. The pig industry in the United States has had a 100% legislative checkoff program since 1986. (National Pork Board) 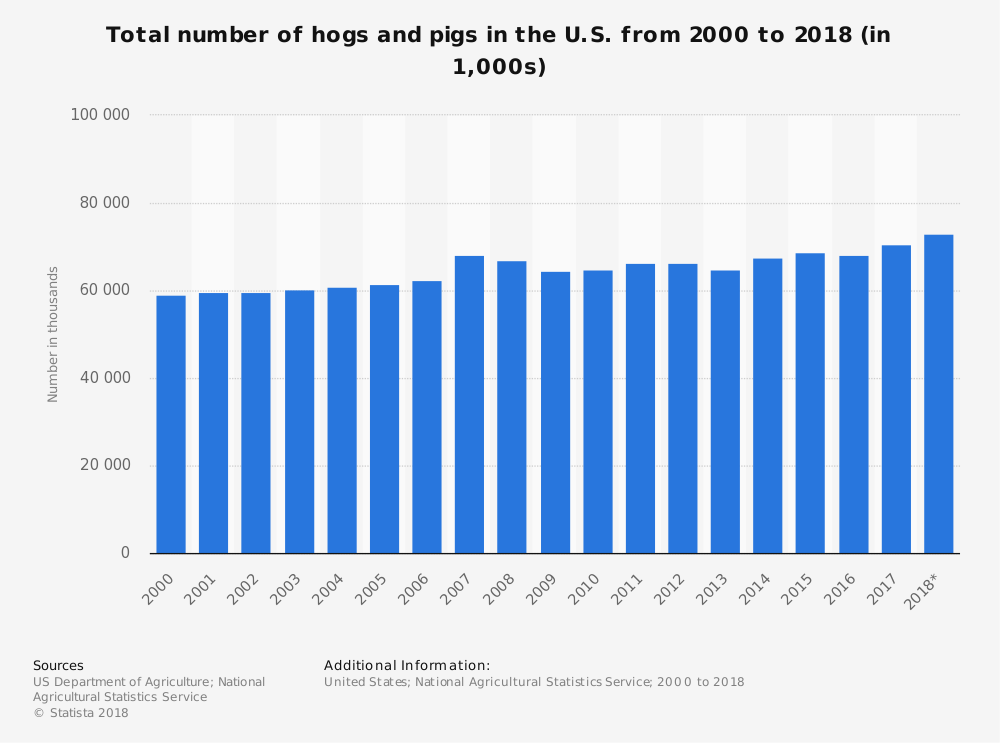 #3. Exports accounted for over 26% of the total pork and pork variety meat production in the United States in 2017. The came to an average export value of $53 for every hog that was marketed. (National Pork Board)

#4. Since 2010, the number of exports created by the pork industry in the United States has increased by more than 33%. At the same time, pork consumption in the U.S. has increased by over 8%. (National Pork Board)

#6. Variety meat exports from the pork industry in the U.S. to China and Hong Kong equal $6 for every pig that is marketed. In these export markets, the ears and stomachs fetch higher prices than the loins do. (National Pork Board)

#7. Edible variety meat exports for the U.S. pig industry reached a record $1.17 billion in 2017. When China is combined with Mexico, they account for 86% of the exports in this segment of the industry. (National Pork Board)

#8. 31% of the exports generated by the global pork industry come from the United States, making the U.S. second in total exports behind the EU-28. (National Pork Board)

#9. Exports of pork from the United States have increased in volume by 2,000% since 1989, which was the first year the Free Trade Agreement with Canada was introduced. (National Pork Board)

#10. Over 60,000 pork producers are currently active in the United States, marketing over $115 million hogs to domestic and international customers. (National Pork Producers’ Council) 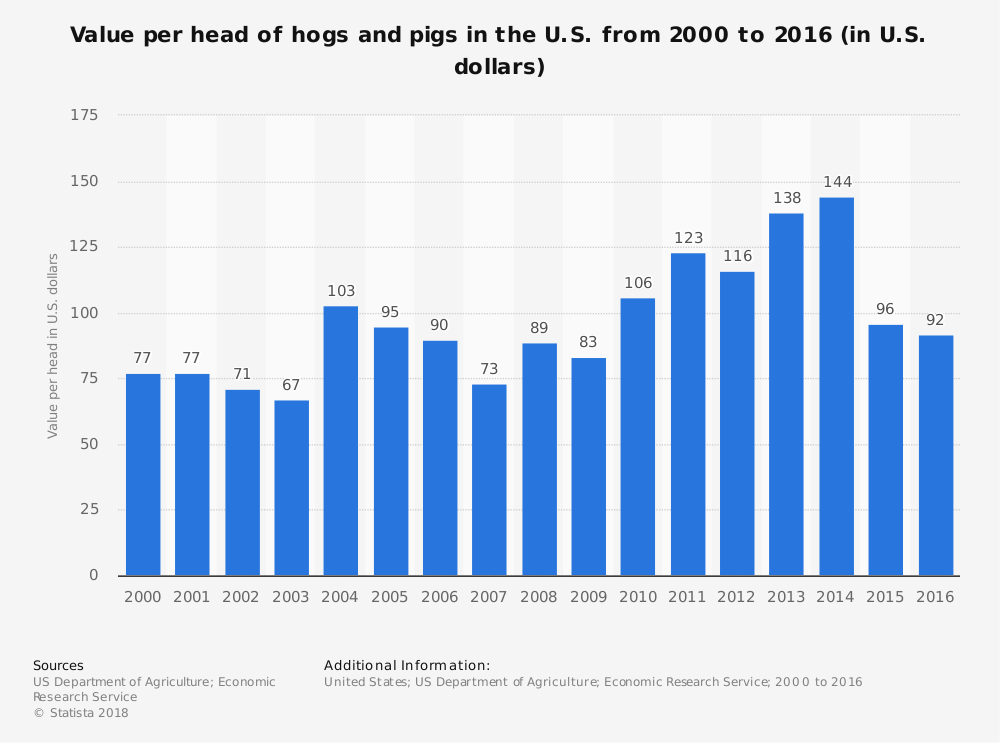 #11. In the United States, over 550,000 jobs are currently supported by pork producers, with jobs ranging from farmers to meat processors to butchers and retailers that you can find on Main Street in each community. (National Pork Producers’ Council)

#12. Over $22 billion in personal income is supported by the hog and pig industry in the U.S., which adds a total of $39 billion to the overall GDP. (National Pork Producers’ Council)

#13. When consumer-related purchases of pork products are combined with the processing and slaughtering sectors, the total economic impact of the industry tops $120 billion each year. (National Pork Producers’ Council)

#14. Animal agriculture within the United States is responsible for about 2.5% of the total greenhouse gas emissions that are generated. For pork farmers, their share of this responsibility is about 0.3%. (National Pork Producers’ Council)

#15. The average number of annual pigs per breeding herd animal, which includes boars, gilts, and sows, was 19.5 in 2014. The average utilization of breeding females in 2015 was 49%. (U.S. Department of Agriculture)

#17. Over the past 20 years, producers have reduced the size of the breeding herd while still increasing the total production of hogs and pigs. The breeding herd has decreased by 19% since 1994, with just 12% of the total pig and hog population classified as inventory. At the same time, inventories have increased by 8%.

#20. In 2014, 4.9 million head were imported by the pig industry in the United States, with feeder pig imports from Canada accounting for 80% of the total market. (U.S. Department of Agriculture)

Although China is the global leader in pig production, much of their market is focused on meeting domestic needs. That frees up the EU-28 and the United States to be the world leaders in pig exports and variety meat products.

Because of this unique situation, there are strong economics in place for European and American pig producers. Although the overall value per pig is down from the record levels experienced in 2004-2007 by the industry, the revenue trends are moving upward. Look for trends, such as hobby farming, to begin influencing this industry over the next 10-year period as consumers shift from intense commercialization to intense customization.

One factor that may negatively influence the industry is a shift in China’s focus. If cheap pork products flood the export market in the next 5 to 10 years, there could be an overflow that would follow a path similar to that of the steel industry. Such an action would make it difficult for North American and European pork producers to cope.