The use of sugarcane originated in Southern Asia at least 2,000 years ago. Before the Indians discovered how to crystalize sugar from the sugarcane in the 4th century, it was regularly chewed for its natural sweetness.

Since then, the sugar industry has thrived in India. Sugar was carried on many of the ancient trade routes, including the oversea networks. Monks would make a pilgrimage to India to learn the sugar crystallization methods, so they could bring them back home. By the 7th century, sugar had created a dynasty in the region and China was working to take it over.

It wouldn’t be until the 18th century, however, that the rest of the world would realize just how important sugar was as a way of life. With sugar prices rising exponentially, Great Britain decided to establish a sugar industry in India once again.

With refining methods based on ancient practices combining with modern technologies, the Indian sugar industry has once again become one of the world’s top producers of this commodity.

#1. In 2016, the centrifugal sugar production from the Indian sugar industry was 21.9 million metric tons, which is a reduction in quantity of 20% from the year before. For the 2017-2018 growing season, an increase of 18% is estimated. (U.S. Department of Agriculture)

#2. Production of sugar in India covers 4.7 million hectares of crop space, with a full capacity of an estimated 330 million metric tons. Uttar Pradesh is the largest sugar producer for the industry, followed by Maharashtra. (U.S. Department of Agriculture) 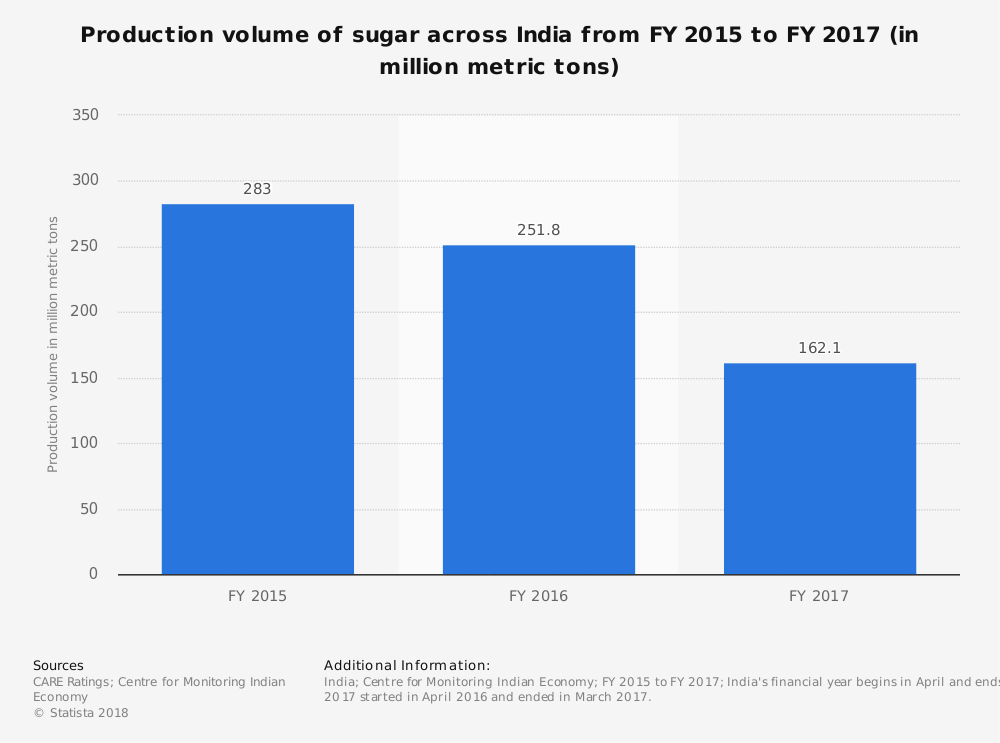 #3. The estimate sugar consumption expected for the 2017-2018 growing season in India is 26 million metric tons. The industry imports sugar when necessary, about 500,000 metric tons, to supplement domestic demand levels. (U.S. Department of Agriculture)

#4. Out-year sugar production, which includes open-pan sugar prepared from evaporation, is estimated to be 540,000 metric tons and is included in the overall figures. This type of sugar is called khandsari. (U.S. Department of Agriculture)

#5. The national sugarcane yield in Indian was 70 million tons per hectare in 2017, which was 6 million tons higher than the year before. (U.S. Department of Agriculture)

#6. Since July 2015, sugar prices have improved by 58% and the 2017 harvest helped to stabilize the industry. At the time of writing, wholesale sugar from India was selling at $600 per metric ton. (U.S. Department of Agriculture)

#7. Since October 2016, sugar prices on the international market have been lower than what the domestic Indian sugar industry has experienced. That has kept much of the market selling to local customers. (U.S. Department of Agriculture)

#8. When the industry does need to import sugar, which rarely exceeds 800,000 metric tons in a season, their main supplier is Brazil. Small imports of sugar from New Zealand and the U.K. are also common. During times of shortage, sugar is also sourced from Germany, Australia, Italy, the U.S., and the United Arab Emirates. (U.S. Department of Agriculture)

#9. For the 2017-2018 budget, $76 million was allocated from the Sugar Development Fund to assist sugar mills with the payment of capital loans which total nearly $1 billion. (U.S. Department of Agriculture) 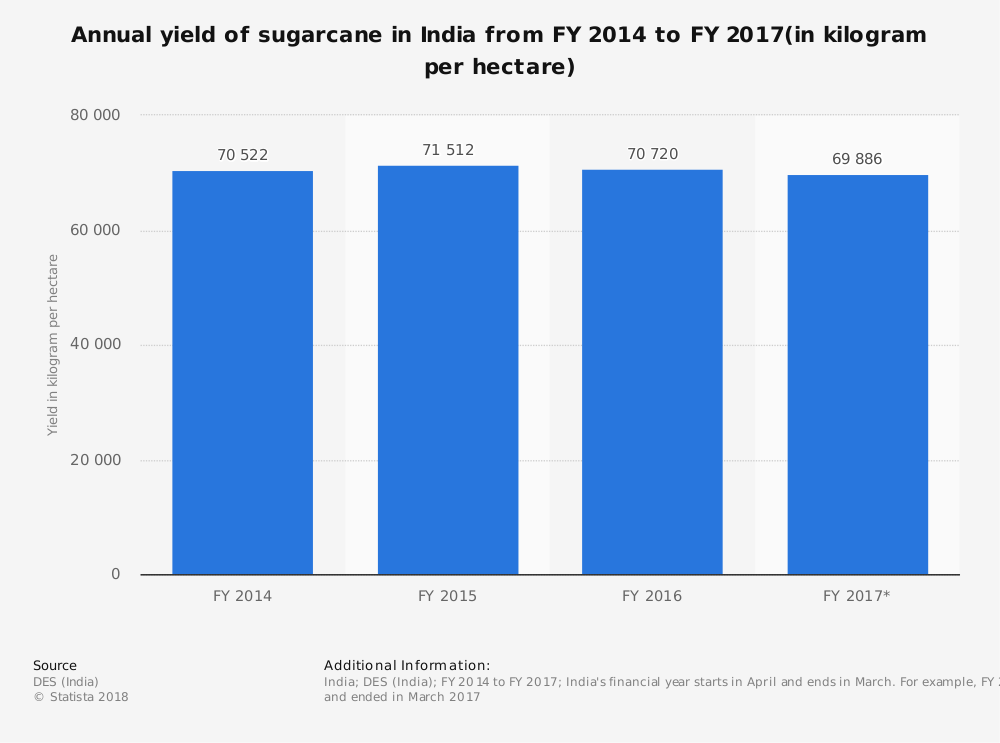 #11. In the 2016-2017 growing season, there were 493 factories in operation for the sugar industry in India. They helped to produce over 9 million tons of molasses, in addition to the sugar production levels that were created. (Indian Sugar Mills Association)

#12. The annual sugar production worldwide is about 188 million tons. That makes the India sugar industry responsible for about 20% of the global industry, even if much of its business occurs domestically. (Statista)

#13. Sugarcane is responsible for about 80% of the world’s sugar crop. The sugar industry in India has a minor influence on sugar beet crops, with only Punjab seeing sugar beets being more successful than sugarcane. (Times of India)

#14. Developing countries are responsible for 77% of the world’s sugar consumption. India is the largest sugar consumer in the world, with 24.76 million tons consumed annually. (International Sugar Organization)

#19. More than 35 million people are employed by the sugar industry in India, with another 350,000 workers employed indirectly through ancillary activities. (Food and Agriculture Organization)

#20. About 7% of the rural population in India is involved in growing or processing sugar as their primary form of employment. (Food and Agriculture Organization) 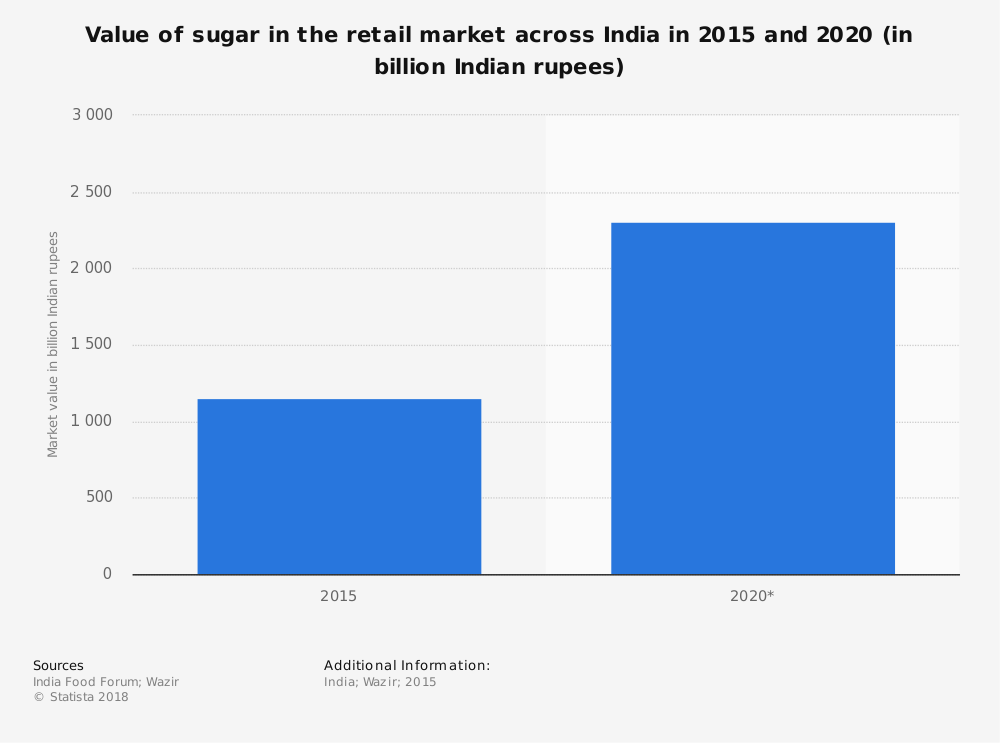 The Indian sugar industry is highly dependent upon the seasonal monsoon to maximize its potential. In the 2016 growing season, when some areas did not receive their usual monsoon precipitation, production levels dropped by 20% or more. Although the most recent season shows an impressive production gain, the reality is that production levels are simply being restored to their past potential.

What holds the India sugar industry back from its full potential is a lack of adequate resources. With funding in place to cover some of the financial burdens of growers and mills, production levels should continue to increase for the next 5-year and 10-year forecasts.

The world is not going to lose its craving for sugar any time soon. The industry in India has an advantage in that its superior qualities create higher pricing, which further increases interest in it. Much of the supply remains domestic as well, which creates scarcity in the export market for it, further increasing its value.