The European apparel industry is home to some of the most lucrative markets in the world for clothing, textiles, and various apparel items. Germany’s clothing industry offers the most value, totaling more than $63 billion in 2017. Western Europe typically performs better than the Eastern continent in terms of value, but the latter sector has seen a 27% increase in market value since 2013.

Girls and women’s apparel are responsible for the largest share of revenues earned by the industry overall, representing 38% of the market in 2017.

The dynamics of the European apparel industry have changed in recent years, with many companies choosing to outsource their production to cheaper locations around the world. Countries such as Bangladesh, India, Cambodia, and China now rank as the leading suppliers of imported clothing items to the European Union. The imports from China alone were valued at roughly $30 billion in 2017.

Apparel manufacturing still has a place on the European continent as well, with a turnover valued at more than $200 billion. Despite the increases in revenues, employment has dropped in Europe within the industry by more than 300,000 positions in 2017 alone.

#1. The total household expenditure on clothing and textiles in the European Union was approximately $550 billion in 2017. (Statista)

#2. The total value of clothing exports from the European Union in 2016 was over $117 billion. (Statista) 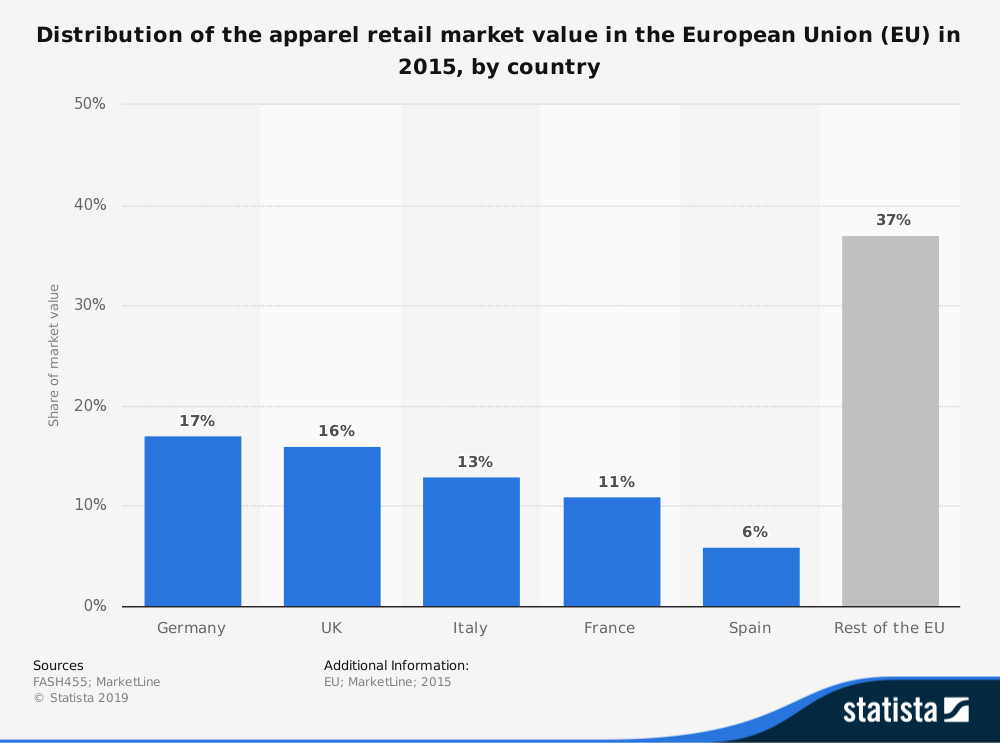 #3. 36% of the imports for the European apparel industry in 2017 were for women’s clothing. (Statista)

#4. The online market for clothing and apparel is growing rapidly in Europe, enabling organizations such as ASOS to generate revenues worth £1.9 billion in 2017. Zalando had more than $5 billion in revenues for that financial year as well. (Statista)

#6. There were over 120,000 enterprises active in the European apparel industry in 2016. Another 61,000 firms were active in the textile segment of the industry. (Eurostat)

#8. The value of output for the European apparel industry in 2016 was over €65 billion. The textile segment was able to provide another €76 billion of output. (Eurostat)

#9. Over 850,000 people are employed by the apparel industry in Europe, with another 555,000 people employed in the textile sector. (Eurostat)

#10. 90% of the value of apparel output in the European Union in 2016 came from just nine countries. Four of them were from the east: Portugal, Romania, Poland, and Bulgaria. (Eurostat) 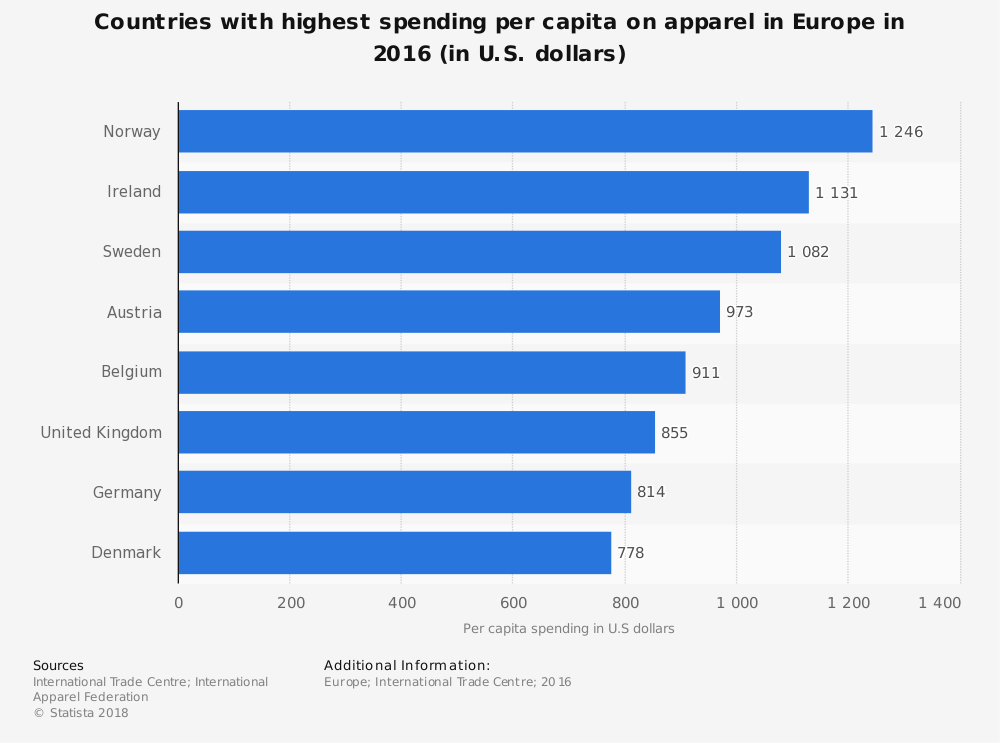 #11. Labor only accounts for 22.8% of the total apparel production cost for the European apparel industry as of 2016. That figure is substantially lower than the 30% figure that was registered in 2006. (Eurostat)

#13. Italy is ranked as the fourth largest knitwear exporter to the European Union as of 2016, with nearly €6 billion of product represented in this figure. Spain was ranked fifth with roughly £5 billion of knitwear. China, Bangladesh, and Turkey all provided more exports to the EU-28 during that period. (Eurostat)

#14. Italy is also the third-largest exporter of major woven apparel to the European Union as of 2016. They provided another £6 billion work of product to the continent from that figure. Spain was again fifth in this category, providing about £5.5 billion in woven apparel. (Eurostat)

#15. Poland is ranked as the fourth-fastest growing apparel exporter by percentage in 2015, behind only Bangladesh, Vietnam, India, and Cambodia. (WTO)

#16. 60% of the apparel imports that are managed by the European apparel industry originate on the Asian continent. Another 35% occur come from other nations on the continent. (INTRACEN)

#17. Approximately €4.9 billion of investments help to feel the grows of the European apparel industry in 2017. External trade was more dynamic that year as well, with almost €48 billion of textile in clothing products exported. (Euratex)

#18. 28% of the exports of products in the European apparel industry in 2017 were for technical textiles. 27% of exports were for woven fabrics. These commodities were followed by miscellaneous textiles (12%) yarns and threads (8%), and knitted fabrics (7%). (CITH)

#19. The United States was the most significant textile customer for the European apparel industry, representing £2.605 billion in total value. China, Turkey, Morocco, and Switzerland all provided another £1.398 billion or more in revenues for textiles. (CITH)

#20. 36% of the imports of clothing products to the European Union in 2017 were for women’s clothing, whereas 25% of the market were for men’s items. In the export market, women’s clothing represented 42% of the EU-28’s share, while men’s clothing was 23% of this market segment. (CITH)

Clothing and textiles provide a diverse sector that plays in important role for the manufacturing industries of Europe. Although the sector has gone through radical changes in recent years to maintain its competitiveness, the addition of high value-added products has brought tremendous rewards to the industry.

Companies have worked hard to begin improving their competitiveness by reducing or eliminating the mass production of simple products. They have begun to concentrate instead on a wider variety of items that offer more value per transaction. When this trait is combined with the fact that European producers are global leaders in markets that involve industrial or technical textiles and non-woven items, there is a lot of growth potential waiting for this industry in the future.

We see the European apparel industry continued to grow at a rate of 3% to 5% over the next 5-year forecast period which ends in 2024. This growth is a reflection of revenues instead of employment. About 10% of the available positions were eliminated in 2017 alone. We see this as a continuing trend as firms begin to look for new ways to automate repetitive tasks. This process will keep costs steady for consumers, product a strong revenue base, and provide potential opportunities for investors.