Kenya is one of the oldest tea-producing nations on the African continent. Tea was first introduced to the county in 1903. It would become a commercialized industry in 1924. It is a major cash crop for the nation and has been the leading foreign exchange earner for several decades.

Most tea-growing regions in Kenya require manual labor to harvest tea products. Some modernization, with tea-plucking machines, has been introduced to the industry. According to the U.S. Department of Labor, however, the industry is included with a list of international industries which make use of child labor in unethical ways, which limits the size of certain export markets.

#1. The Kenya tea industry is the largest exporter of black tea products in the world today. In 2017, the output provided by the industry was in excess of 400,000 metric tons. (Business Daily Africa)

#2. Pakistan is the largest importer of teas produced in Kenya on a regular basis. In January 2017, the country imported over 24 million kilograms of Kenyan tea. Egypt, the United Kingdom, and United Arab Emirates are consistent importers of tea as well. (Business Daily Africa) 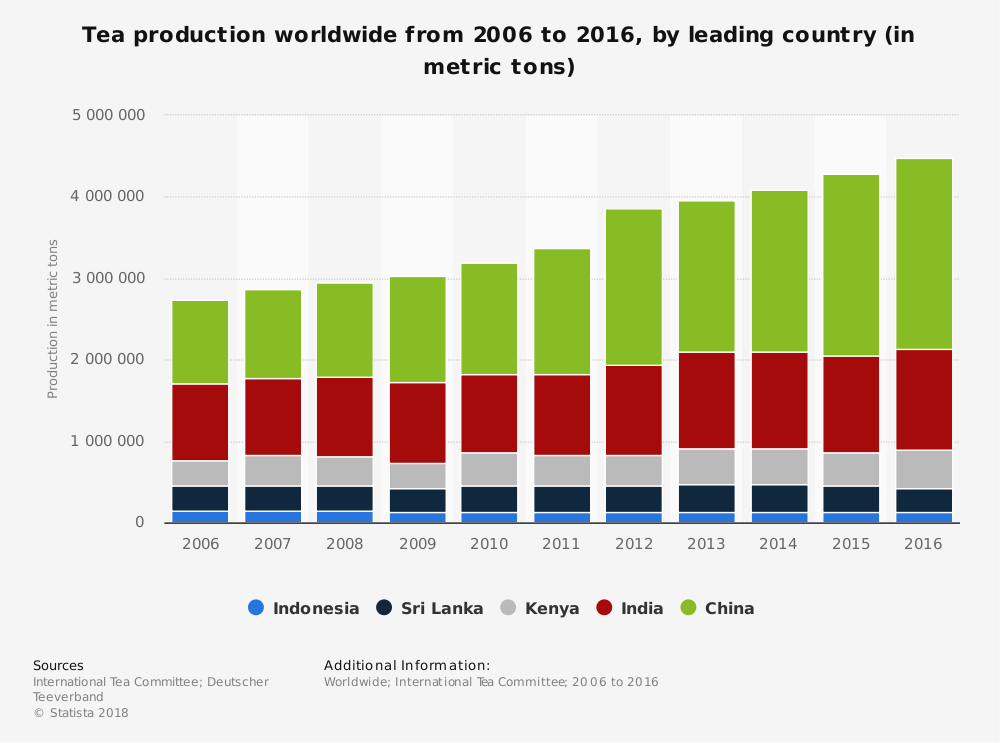 #3. In 2015, there were over 209,000 hectares planted with tea crops in Kenya, which was the highest number ever recorded. These croplands produced nearly 400 million kilograms of tea for the year. (East Africa Tea Trade Association)

#4. Small holders and independent growers are responsible for approximately two-thirds of the tea that is produced in Kenya each year. (East Africa Tea Trade Association)

#5. In May 2016, tea production in Kenya was at 38.82 million kilograms, with increased precipitation in the region promoting an increase in production of nearly 2%. (Kenya Tea Board)

#8. 86% of the export volume for Kenyan tea is directed toward traditional markets for the industry, which includes Iran, Afghanistan, Russia, and the United States. (Kenya Tea Board)

#10. About 50 varieties of tea have been developed so far to be grown in the unique climate of Kenya. 66 tea factories help to serve the farmers and commercial growers that work within the industry. (Tea Research Foundation of Kenya)

#11. The value of the Kenya tea industry is expected to reach about $29 billion by 2020, supported by global brands like Lipton, Twinings, and Celestial Seasonings. (Research and Markets)

#12. About 90% of the tea crop in Kenya each year is picketed by hand. (Research and Markets)

#13. Kenya is responsible for about 25% of the total global exports for black tea, compared to the 18% share China achieves and the 17% share from Sri Lanka. In 2016, Kenya achieved a 32% share of total tea exports. (Research and Markets)

#14. Since 1998, the incidents of weekly tea plucking within the industry have risen from 18% of total plantings to 80%, which has improved the health of the plants during peak periods of crop growth. (International Journal of Tea Science)

#15. Since 1970, small holders have been responsible for more hectares of tea than estates. The total acreage for estates within the industry remained static from 1990-2000, with large increases only being seen since 2012. (International Journal of Tea Science)

#16. About 10% of the population of Kenya rely on an income that is derived from their work within the local tea industry. In total, the industry contributes about 4% of Kenya’s GDP each year. (Food and Agriculture Organization)

#17. About one-quarter of the country’s export earnings each year comes through the sale and export of tea productions. (Food and Agriculture Organization)

#19. In 2018, production levels of tea from April reports show the industry has experienced a crop increase of 22.7%. Only Sri Lanka and Malawi have seen gains of 5.6% and 2.9% respectively. Production in India is down by 7%, while it is off by more than 8% in Uganda. (Africa Tea Brokers)

Most of the tea that is grown in Kenya is processed using the traditional crush/tear/curl method. That makes it a suitable product for many blends within markets that prefer black tea products. The flavors are unique compared to teas grown in India and China, which gives the product a natural advantage on the export market.

The issue that the Kenya tea industry faces is the inclusion of child labor. The United States reports that the children in the industry are engaged in the “worst forms of child labor.” In 2016, Kenya passed the National Policy on the Elimination of Child Labor. A new division of police, called the Child Protection Unit, has been created to investigate cases. Social programs have been implemented to protect children.

At the same time, Kenya has not ratified a United Nations protocol on the sale of children, child prostitution, and child pornography

More must be done to remove this issue from the industry to help it be able to maximize its potential. The Kenya tea industry will continue to grow, with many traditional markets unphased by these issues, assuming weather patterns remain similar. Expect more growers, more volume, and more revenues from regional exports.