Brazil is home to the third-largest aviation market globally. 60% of the busiest airports in Latin America are located within the country. The Brazil aircraft industry is also part of an elite group, as they have helped their country become 1 of just 5 in the world today which manufacturing commercial jets.

For more than a decade, Brazil’s aircraft industry has been a top export destination for U.S. manufacturers, with its diverse infrastructure, unique geographic location, and overall industry expertise. Everyone from parts suppliers to aircraft manufacturers are finding opportunities to grow and earn profits in Brazil.

What holds the Brazil aircraft industry back from its full potential is the government’s refusal to sign the Agreement on Trade in Civil Aircraft. As it stands today, the industry ranks 11th in the world for total revenues and output. Signing the agreement would make the country rank 10th instead.

#1. In 2013, the total revenues earned by the Brazil aircraft industry totaled $7 billion. From that total, Embraer, the largest manufacturer in the country, produced $6.24 billion. (U.S. Department of Commerce)

#2. Since 2006, Embraer has delivered more regional jets than Bombardier, which is located in Canada and is their only primary competitor within the industry. (U.S. Department of Commerce) 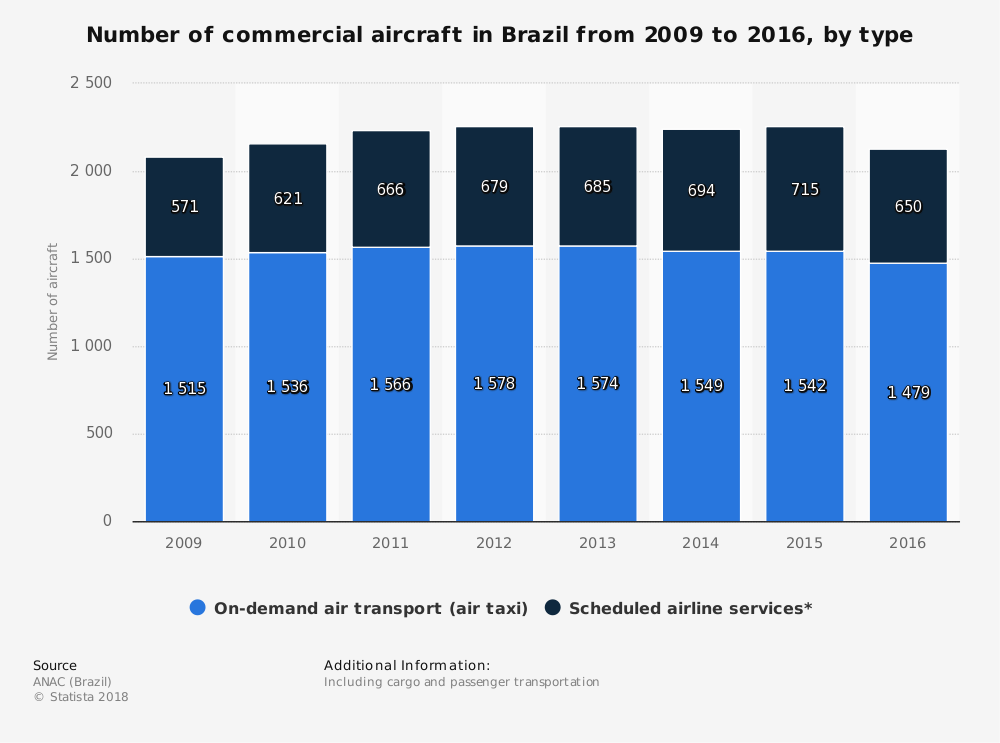 #3. In 2014, firms in the United States exported $5.2 billion in aerospace products to the aircraft industry in Brazil. At the same time, aerospace firms in the U.S. imported $2.3 billion in goods from Brazil. (U.S. Department of Commerce)

#5. Over 473,000 tons of air freight were carried within the Brazilian aircraft industry in 2012, with 4 major airlines doing the bulk of the work. (U.S. Department of Commerce)

#6. There are 106 airports currently providing services to customers in Brazil, with most airlines keeping their hubs, purchasing, and maintenance in Sao Paulo, Belo Horizonte, or Rio de Janeiro. (U.S. Department of Commerce)

#8. Brazil is the second-largest market in the world for agricultural aircraft and for helicopters. (The Strategic View)

#9. National flag carriers in Brazil were able to increase the number of international routes they serve by 1.9% in 2016. At the same time, however, several foreign airlines began to cut back on their international routes to Brazil because they were experiencing an overall lack of demand. (The Strategic View)

#10. From 2003-2013, the national flag carriers in Brazil were able to increase their share of international passengers by 55%. During that time period, international carriers increased their passenger share by 147%. (The Strategic View) 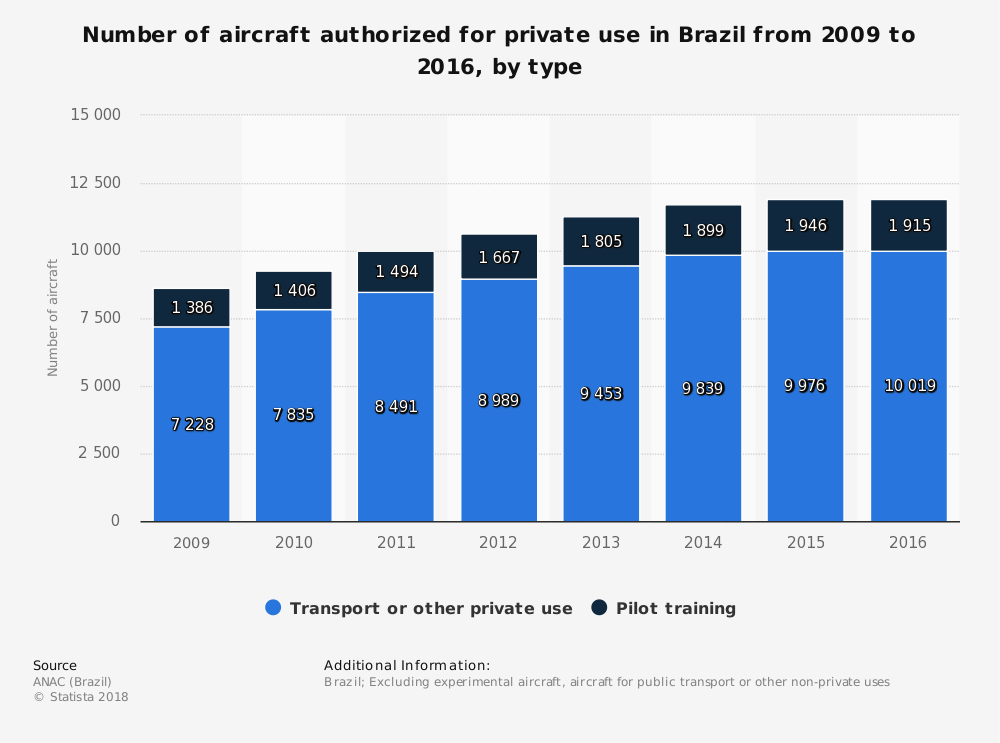 #11. 90% of the local aviation market in Brazil is owned by Embraer, which is the third-largest aerospace company in the world today. About 50 companies are affiliated with the primary industry association group in Brazil as well, competing for the remaining 10% market share of the industry. (The Brazil Business)

#12. About BRL 443 million was invested in the local aircraft industry by the government in 2012 to support the development of space projects. Spending was directed toward infrastructure, research and development, satellites, and various applications. (The Brazil Business)

#13. There are 1.1 million jobs which are supported by the aircraft industry in Brazil, contributing a gross value-added contribution of $32.9 billion to the GDP each year. (IATA)

#14. More than 270,000 people are directly employed by airlines, airport operators, or enterprises that support or are located on properties that are owned by the industry. (IATA)

#15. Foreign tourists spend $7 billion per year in Brazil thanks to the support offered by the domestic aircraft industry. (IATA)

#16. More than $620 billion in foreign direct investment has been collected over the history of the Brazil aircraft industry. (IATA)

#17. There is a total of 62 airlines which are currently operating in Brazil. These firms support over 2 million takeoffs and landings each year. The busiest airport in the country is Guarulhos International, which serves 39.5 million passengers annually. (IATA) 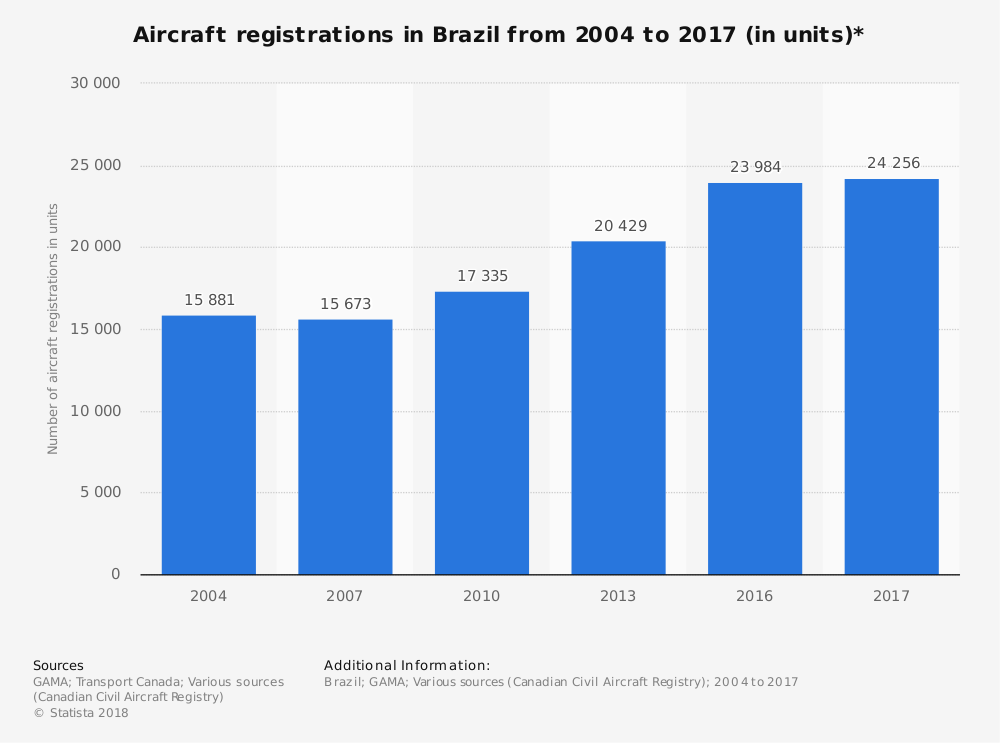 The Brazil aircraft industry will continue to be a significant player in the global aerospace market. Even if the industry struggles to stay in the Top 10 of all major providers of aircraft services with its governance structures and supports, it continues to be the third-largest manufacturer of aircraft in the world today.

As the economy begins to slow down in 2019 in some parts of the world, watch for the industry in Brazil to initiate a return to exporting used aircraft instead of manufacturing new products. Because there has been an increase in the value of the U.S. dollar, foreign sales are rising in Brazil, which has helped some areas of the domestic economy begin the recovery process.

Airport capacities in Brazil, especially from a regional perspective, are about 50% of what they need to be. The government had plans to refurbish 270 regional airports through government assistance to support the industry at one time. Because of the economic lull being experienced in Brazil, that number has been cut to 53.

Travel is increasing in Brazil. Manufacturing opportunities continue to grow. If the economy remains stable and passenger traffic levels continue rising, the Brazil aircraft industry will keep its status as a primary provider of manufactured goods on the global stage.