Although the Australian rice industry doesn’t receive as much attention as the markets in Southeast Asia, there is no denying the influence this industry has on global markets. It has the capacity to grow over 1 million tons of rice each year, even when weather conditions are not favorable to the growth of rice.

A majority of the rice is milled, packed, and then branded by SunRice in the Riverina. They are the sole exporter of Australian rice that is produced in NSW, supplying more than 60 international destinations with rice products.

Australian rice is unique because it uses about 50% less water than the global average to produce a harvest. To promote continued farming success, many rice farmers in Australia have enough moisture in their subsoil after growing rice that they can grow another crop, which is usually wheat.

Some rice fields are turned into pastures outside of the growing season as well. In total, about 40 million people eat rice that was grown in Australia each year.

#1. The Australian rice industry produces about 1.2 million tons of rice each year. In recent years, however, it has been a struggle to reach this average as water restrictions and drought have severely affected the industry. (Australian Bureau of Statistics)

#2. In 2008, a record low in rice harvests produced just 19,400 tons of rice. That was the lowest total produced since 1928 and was just 1% of normal production. Those harvest figures occurred after 5 consecutive years of drought. (SunRice) 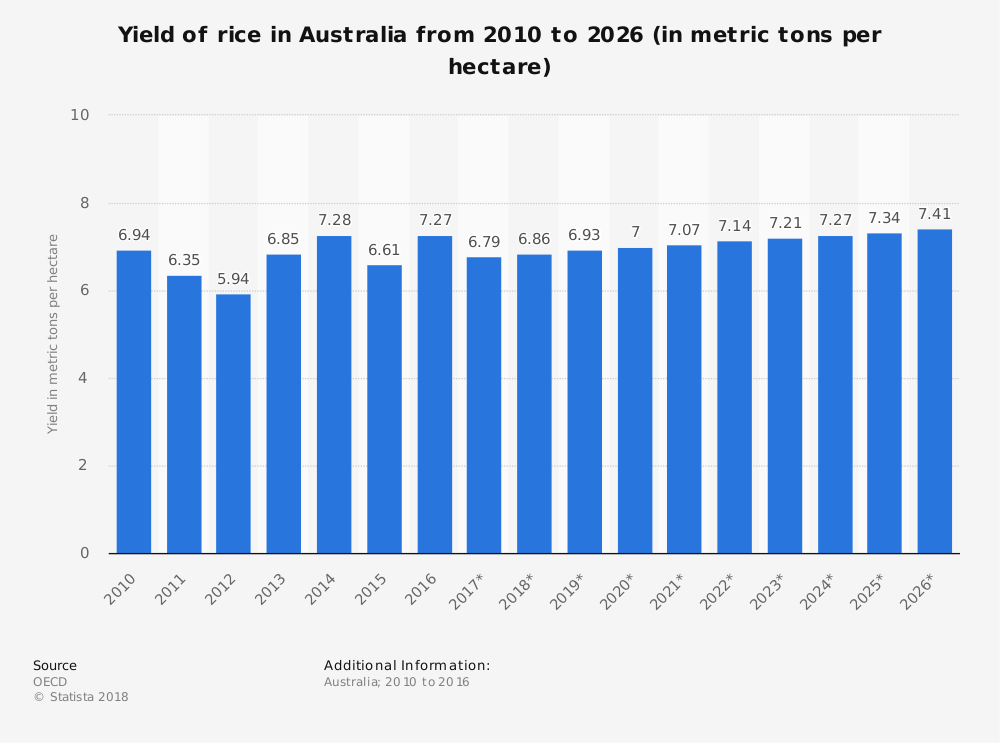 #4. In the 2011 rice harvest, the total production levels rose to 726,000 tons, which was more than triple what had been achieved the previous year. In that harvest season, 9.7 tons of rice were harvested per acre. (ABARES)

#5. The international average of production of 5.4 tons per hectare was surpassed by Australian over 50 years ago. The Australian rice industry currently averages about 8.6 tons of rice per hectare. (Australian Bureau of Statistics)

#7. The water requirements for growing rice in Australia are 5 times less than what it is for oversees rice growers. (International Rice Research Institute)

#8. The annual world production of rice totals 600 million tons each year. Only 25 million tons of the annual harvest is traded outside of the country where it is grown. Australia is the only exporter which produces rice with zero export or production subsidies. (Ricegrowers’ Association of Australia)

#9. About 80% of the rice that is produced in Australia is exported. Top destinations include Japan, Papua New Guinea, Asia, and the Middle East. (AgriFutures Australia)

#10. Since the 1940s, rice growers in Australia have developed 40+ new varieties of short, medium, and long-grain rice that is better suited to the local growing conditions in the country. Reiziq, Sherpa, and Opus varieties lead in total production volume. (AgriFutures Australia)

#12. Almost all rice in Australia is grown in New South Wales, under irrigation. 96% of the average rice crop in Australia comes from the NSW region. About 4% comes from Queensland. Minimal contributions (less than 1%) come from Victoria and the Northern Territory. (Planet Health Australia)

#13. 80% of the rice that is grown in Australia is a medium-grain Japonica variety. Some products are grown specifically for the export markets. (Australia Department of Agriculture)

#14. The amount of acreage that is planted with rice varies dramatically each year. In the past 20 years, a high of 113,000 hectares has been achieved, as well as a low of 27,000 hectares. (Australia Department of Agriculture)

#16. Total cash receipts for the Australian rice industry topped $900,000 for the first time in the 2014/15 for the average farm. Total cash costs also peaked that year at $675,000. (Australia Department of Agriculture)

#17. Although farm cash income has declined in recent years, the gap between costs and receipts is a recent trend that has helped the rice industry be able to achieve record margin levels. (Australia Department of Agriculture)

#18. To improve working conditions, the Australian government has reduced the tax rate to 15% for those who work on holidays. (Australia Department of Agriculture)

#19. Employment opportunities are minimal within the Australian rice industry from a growing perspective. In the average year, about 700 people are responsible for the total rice harvest that is generated each year. (IBIS World)

Although farmers in Australia are able to more with rice than most other farmers in the world today, they are still facing weather challenges. Drought years have been more common than not in the past 20 years. Record low harvests have had a powerful impact on the overall industry.

Even though one good season is all that is required to help the industry rebound, those years are growing further apart.

Not all rice businesses grow rice every season either, which can impact the industry as well. The gross value of production on a good season, like the one in 2012, is about $245 million.

If the drought years begin to reduce, then the Australian rice industry has a chance to thrive. Over 100,000 hectares was planted in 2012, which is an encouraging sign for the industry. There are also 1,500 farms that are involved with the industry in some way, which is near a record high.

When looking at 5-year or 10-year projections, there is a lot of uncertainty that cannot be predicted. A wait-and-see approach is strongly recommended for those who are thinking about becoming involved.