The book industry in Australia offers the same business model that you’ll find in other markets around the world. There are three general categories of publishers to look at: large, small, and micro.

The Australian book industry features several unique attributes which make it challenging to get an accurateidea of its status. The Australian Bureau of Statistics hasn’t updated some statistics since 2003, while others feature funds mixed with U.S. Dollars and Australian Dollars in the figures. All figures listed below are in Australian currencies.

#2. The total value of the book industry in Australia declined from a value of $1.29 billion in 2009 to a low of $919 million in 2013. Values have slowly started to rise since then, but continue to be under $1 billion. (Nielsen BookScan) 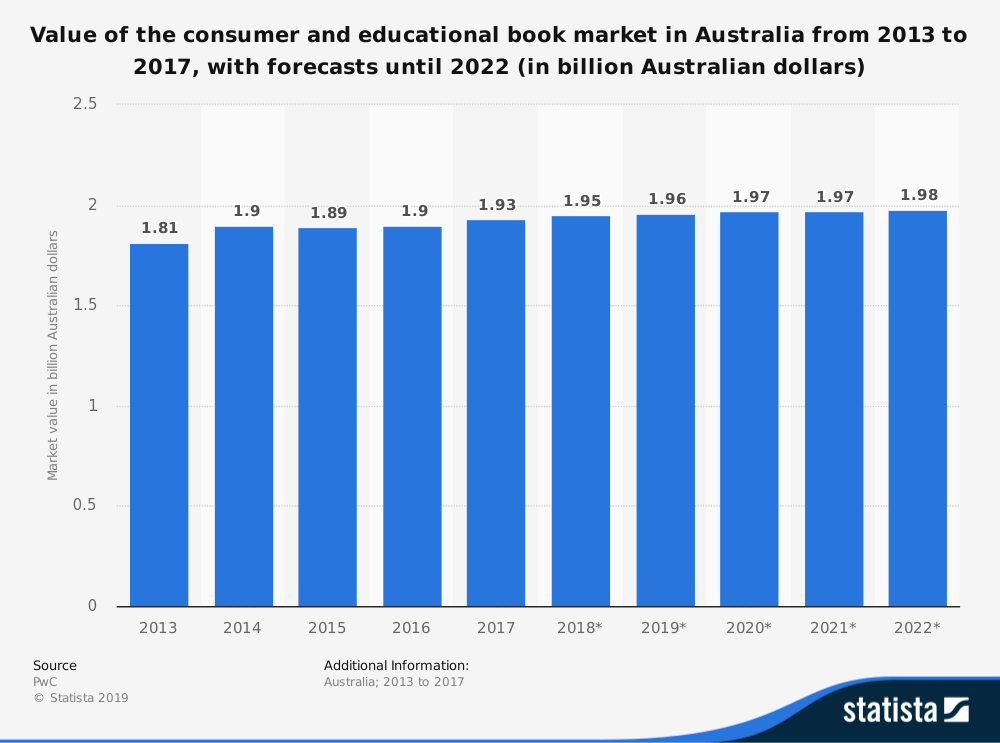 #3. Educational books make up the largest share of the Australian book industry, representing over 41% of the books sold. Adult non-fiction books hold the second-largest share at 27%, followed by adult fiction (14%) and children’s books (8.2%). (IBIS World)

#5. The markets for education publishing in Australia have been more stable than the other segments of the book industry, with $410 million in sales achieved in 2015. Higher education sales of $160 million lead the way, followed by secondary education sales at $150 million and primary education books at $100 million. (Australian Publishers Association)

#6. There are currently about 2,300 self-published authors or start-up publishers who are currently active in the Australian book industry. (Thorpe-Bowker)

#7. Only 24 publishers in Australia published more than 100 books in 2014, responsible for over 9,200 different publications. (Thorpe-Bowker)

#8. The average author in the Australian book industry earns an average salary from writing alone of $13,000. (The Australian)

#9. 48% of consumers who purchase books in Australia say that they’re interested in literary fiction, but only 15% of those in that group actually purchase a book within that category. A similar gap exists (42% vs. 12%) for indigenous writing too. (The Australian)

#10. Although 75% of people in Australian say that books make a positive contribution to their life that is worth their cost, 57% of customers say that the titles available to them are too expensive. (The Australian) 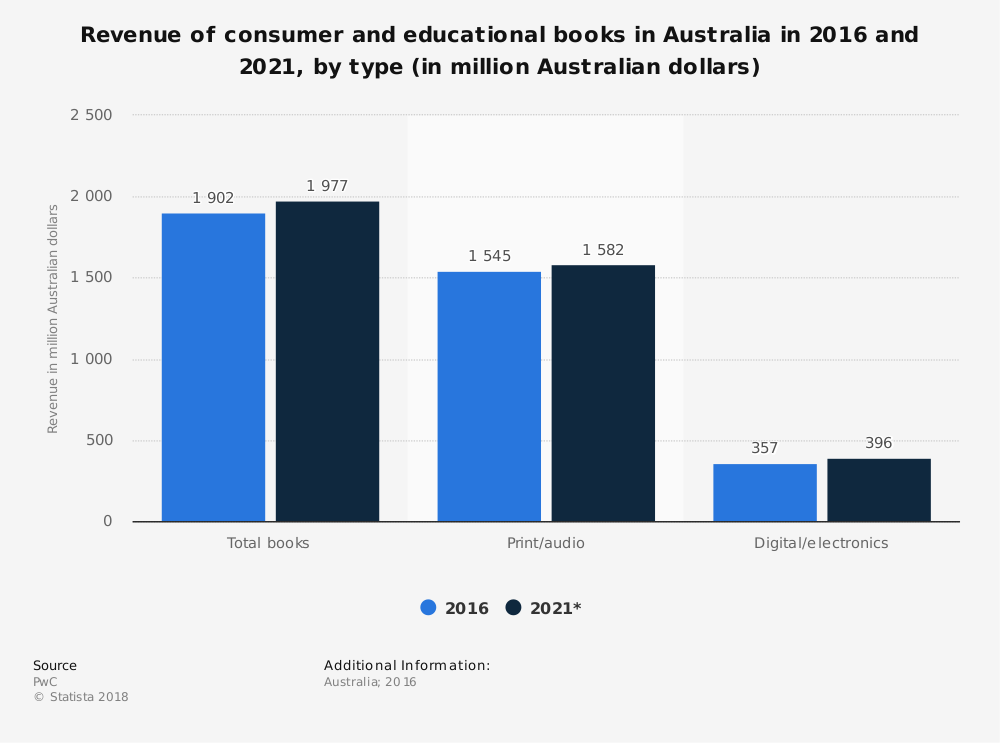 #11. Traditional publishers account for 55% of the sales which occur through online platforms in Australia, such as Amazon’s Kindle Store or Apple’s iBookstore. (Thorpe-Bowker)

#12. Paperback books are the preferred option for consumers in the Australian book industry, accounting for 48% of total sales in 2016. Online resources, e-books, and digital formats represent 23% of total sales. CDs, DVDs, and similar products offer another 15% of the revenues earned by the industry. (Thorpe-Bowker)

#13. Hardback book sales in 2016 represented just 8% of the total books published. In 2008, this segment represented 13% of the available titles. (Thorpe-Bowker)

#14. The title Truly Madly Guilty led the bestsellers list for fiction in 2016, selling 174,000 copies. Big Little Lies sold 155,000 copies to reach the second spot on the list. Only The Husband’s Secret and The Four Legendary Kingdoms managed over 100,000 copies sold for the year. (Thorpe-Bowker)

#16. The bestselling fictional book published in Australia in 2016 came from the children’s fiction segment, with The 78-Storey Treehouse selling 342,000 copies. (Thorpe-Bowker)

#17. 43% of rights managers in Australia say that picture books are one of the most in-demand categories right now for the industry, despite the substantial supply numbers available. (Thorpe-Bowker)

#18. 72% of the publishers active in the Australian book industry work with “all or nearly all” local authors. 16% report having some international authors in their stable, while only 12% have a 50/50 split or are “predominately international.” (Macquarie University)

The Australian book industry is struggling under the weight of a shifting industry and economy right now. Large-company disruptors are present, including Google, Apple, and Amazon, who provide access to published titles at reduced costs. There is plenty of interest in the works being published by the industry. It’s just a matter of who, when, and where they purchase items that become of interest.

About half of the population says they read between 1-10 books per year, with 41% self-labeling themselves as a frequent reader.

The one challenge the industry must face is the issue with a lack of men. 8% of the Australian population considers themselves to be a non-reader, and 75% of that group are men. The most common reader is a woman between the ages of 30 to 59 with a tertiary education.

With continued strength from the educational segment, expect more of the status quo from the industry in the next 5-year forecast period. If the industry can reconnect with its core consumers, then growth will occur.