Saudi Arabia has the 15th-largest economy in the world today. It is also the largest economy found in the Northern Africa and Middle East region. With a total population nearing 30 million people, the per capital GDP of $54,600 ranks near the top 20 in the world as well. Although the industrial sector consists primarily of the oil and mining segments, the chemical industry represents a significant cluster of activity for the Kingdom.

The chemicals industry of Saudi Arabia is the most significant export sector for the domestic economy after oil. It accounted for 3.7% of the GDP in 2014, but that figure represented 38% of the overall manufacturing sector. There were over $35 billion worth of chemicals exported during the year, representing 11% of the Kingdom’s total export market.

The Saudi Arabia chemical industry also represents 78% of the non-oil exports that originate from the Kingdom each year. That makes the chemicals cluster in the Kingdom the fastest-growing of its type, giving active firms a comparative advantage when compared to the other manufacturers found in the region.

#1. Saudi Arabia offers an open policy towards the use of skilled and unskilled migrant workers in the chemical industry. They account for roughly 30% of the population, although access is beginning to tighten when job opportunities become available. (Harvard Institute for Strategy and Competitiveness)

#2. There are 89,000 direct jobs provided by the Saudi Arabia chemical industry each year. The active firms also offer up to 356,000 indirect jobs because of industrial activities. 79% of the available positions in this economic segment are held by nationals. (Harvard Institute for Strategy and Competitiveness) 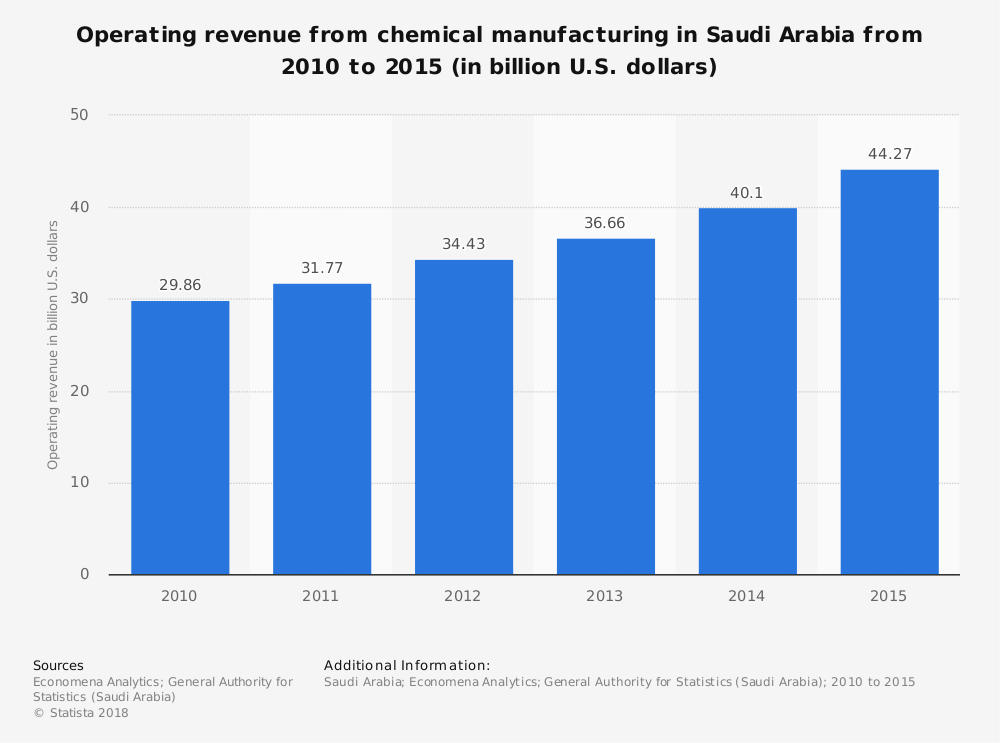 #3. Saudi Arabia is the largest holder of proven oil reserves in the world, holding 16% of the total hydrocarbons that could be used to create new chemical products for domestic and foreign consumption. (Harvard Institute for Strategy and Competitiveness)

#4. Despite investing 25% of the Kingdom’s budget into its educational programs, Saudi Arabia graduates only 29% of the chemical engineers that Germany sends through its universities annually. (Harvard Institute for Strategy and Competitiveness)

#5. Saudi Arabia is expected to add 15 MTPA of chemical production capacity compared to the 1.5 MTPA of capacity expected for Germany. (Harvard Institute for Strategy and Competitiveness)

#6. SABIC is the largest producer of chemical products in Saudi Arabia and was ranked as the fifth-largest in the world according to 2012 revenue figures. With over $50 billion in sales annually, only BASF, Sinopec, ExxonMobil, and Dow Chemical had a better year. (AICHE)

#7. Operating revenues for the chemical industry in Saudi Arabia reached 170 billion SAR in 2016, reflecting a 5% growth rate in capacity in 2016. Total chemical production capacity in the Kingdom stood at 97,267 KT for 2017. (Invest Saudi)

#9. Over half of the petroleum reserves that are available in Saudi Arabia for oil and chemical industry are contained in only eight fields. The Kingdom is home to the largest offshore and onshore fields known in the world today. (EIA)

#11. Saudi Aramco reported a production capacity of 5,590 KT per year of paraxylene, which includes xylenes. (Statista)

#13. Saudi Arabia is the global leader in the production of several key products, including glycol, ethylene, polyethylene, and MYBE. The Kingdom represents roughly 10% of the global share of all chemical production. (Arab News)

#14. State-run Saudi Aramco intends to invest over $100 billion over the next decade through the chemicals sector to improve marketing, refining, and lubes while seeking mergers and acquisitions at the same time. (Arab News)

#15. The Asian chemicals market size is estimated to be worth $1.8 trillion, with Saudi Arabia strategically located at the crossroads of several markets to help provide supports for international demand. (Arab News)

#16. European demand for chemicals is currently estimated to be $750 billion and growing at 4% each year, creating another market opportunity for the Saudi chemical industry. (Arab News)

#17. The African market size for chemicals is also beginning to grow at a rate that is similar to Europe, offering a third market with a potential value of up to $50 billion for the industry to pursue. (Arab News)

#18. The SAGIA (Saudi General Investment Authority) sponsored the signing of an agreement between Sadiq Industries and Italmatch Chemicals to establish an integrated complex in Waad Al-Shamal and the Jubail Industrial City with an estimated investment of $300 million for the project. (Arab News)

There are several advantages to consider with the Saudi Arabia chemical industry that could make this sector a global force on the export stage. What is holding the industry back from its full potential is a lack of skilled employment. The workforce is aging with fewer graduates coming out of schools to replace those who are leaving. That has led to a surge in foreign employment opportunities despite a desire Kingdom-wide to reduce them.

Saudi Arabia will continue to be the home of the largest chemical industry in the gulf region, accounting for at least 25% of the value-added manufacturing in the Kingdom in the next 5-year forecast period ending in 2024. Capacity growth should continue as well, with an average of 10% each year expected.

Two-thirds of the gulf chemical manufacturing that occurs is located in Saudi Arabia. The Kingdom will continue to dominate in this sector as it seeks to diversify its economy away from oil. With these products being the second-largest export commodity available, there are numerous factors which point toward continued strong growth for several years to come.