Mexico is a significant producer of textiles. With its industry based on competitive labor costs and the geographic proximity it has to the United States, NAFTA agreements make it possible to capitalize on both sectors to create a best-prospect segment for yarn, fabric, and equipment produced by American exporters.

63% of the Mexican apparel industry is concentrated in the northeastern and central portions of the country. This region includes the areas of Mexico City, Puebla, and a majority of the border states of the U.S., representing a total of 1.3% of the GDP. In 2017, the American textile sector exports to Mexico reached $5.99 billion. The imports then totaled $2.5 billion in the same year.

The Mexico apparel industry has benefited in recent years with a reduction of tariffs on its imports from the United States. With new initiatives to strengthen firms that are active, combined with a push to enforce existing tax rules, the many benefits that this country has makes it the top export market for the U.S. in specialty industrial fabrics since 2008.

The total value of the Mexico apparel industry in 2018 was approximately $22.08 billion. That was an 8.4% increase over the year before.

#1. In 2016, exports to Mexico for American specialty and industrial fabrics accounted for 50% of the total for the U.S., representing a 1.1% increase from the year before. (U.S Department of Commerce)

#2. The largest market for American medical textiles is Mexico, accounting for 27% of the domestic market in the Mexican apparel industry. (U.S Department of Commerce) 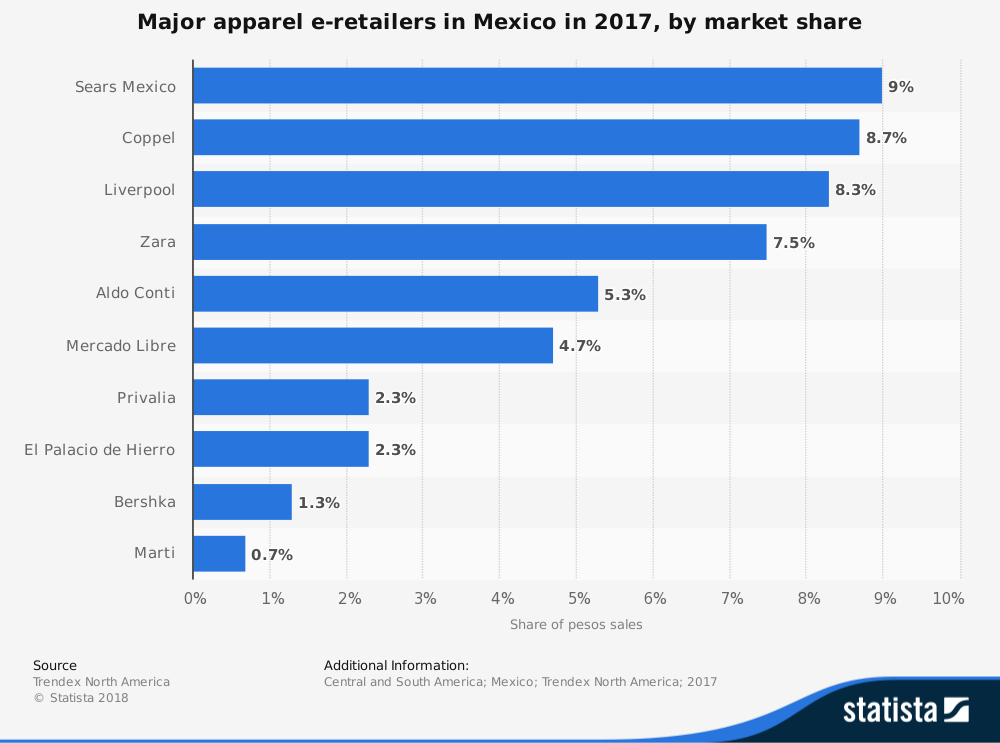 #3. 78% of the consumers who shop with the Mexico apparel industry say that they want temperature control features in the products that they choose. That’s the same percentage who wish to have wrinkle resistance and easy-care features incorporated into their clothing. (Global Lifestyle Monitor)

#4. 76% of consumers say that they are likely to seek out odor control or resistance features in their apparel in the next year. (Global Lifestyle Monitor)

#5. 75% of people who shop with the Mexico apparel industry say that stain resistance is one of the most essential features in their clothing. 74% want to see more moisture management features incorporated into each item, while 70% want UV protection. (Global Lifestyle Monitor)

#6. 51% of consumers in Mexico say that they are likely to purchase clothing that helps them to relieve stress. 47% say that they would buy something which features hydration monitoring. 44% say that clothing which would monitor their heart rate would be attractive to them. (Global Lifestyle Monitor)

#7. 94% of consumers in Mexico say that environmental issues affect their daily life in some way, which is why they shop for specific apparel items. Only 75% of consumers in the United States agree with that sentiment. (Cotton Incorporated)

#8. 78% of consumers who work with the Mexico apparel industry say that they make an active effort to recycle their textiles or clothing. (Cotton Incorporated)

#9. Two out of three consumers say that they buy clothing which is made from sustainable or natural materials over synthetics when they have the option. (Cotton Incorporated)

#10. 69% of consumers say that the influence of sustainability on clothing purchases matters to their overall decision-making process. Only 46% of consumers in the United States agree with that statement, while 61% of the global population would agree. (Cotton Incorporated) 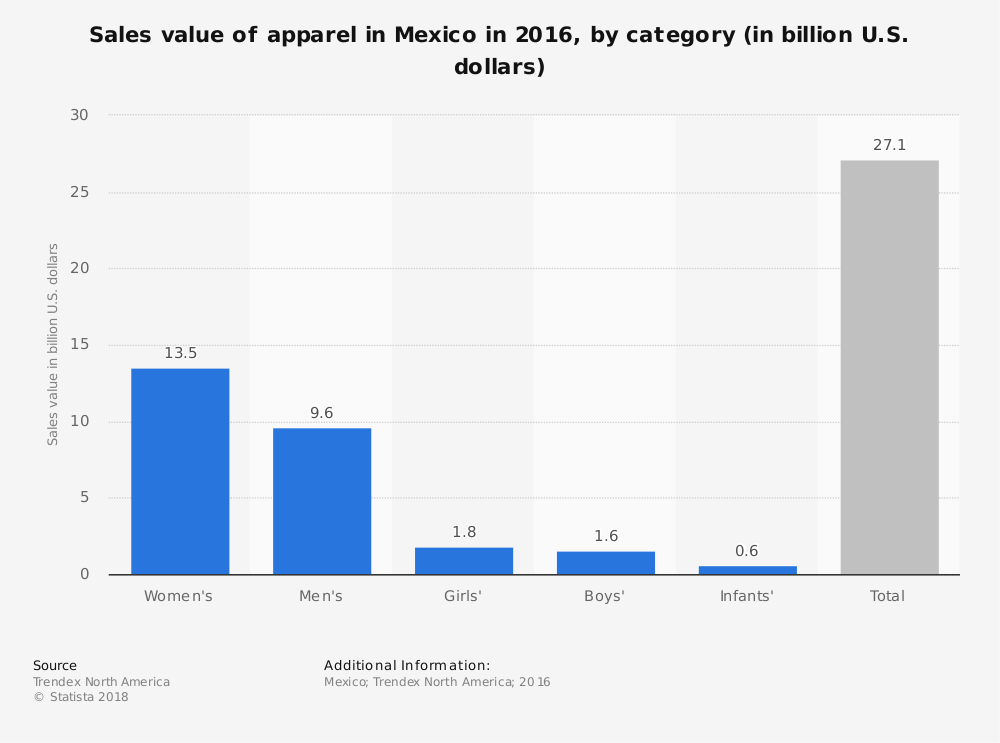 #11. The average consumer in Mexico will spend approximately $166 on apparel items over the course of the year. That figure is up 7% from the year before. (Statista)

#12. The largest market segment for the Mexican apparel industry is for girls and women’s apparel, representing a total of $7.7 billion in 2018. (Statista)

#13. Approximately 415,000 workers receive direct employment opportunities through the Mexico apparel industry each year. About 22,000 apparel companies were active in the country in 2013. (NovaLink)

#14. The textile and apparel industry in Mexico accounts for roughly 6% of the country’s GDP each year. It also provides about 20% of all of the manufacturing employment opportunities that are available in Mexico. (NovaLink)

#15. 63% of the exports that Mexico sends out each year involve the textile and apparel industry. This figure dropped in total value by 5.1% in 2015, but it was still worth roughly $6.5 billion. (Textile Outlook International)

#16. Over 87% of the apparel and textiles that Mexico exports each year is destined to reach the United States. This figure has remained consistent since 2012. Canada is the next largest importer of Mexican apparel, accounting for 1.9% of the overall value. (Textile Outlook International)

#17. Several product categories have experienced steep drops in demand since 2015, with cotton hosiery down by over 57%. Mens’ and boys’ wool suits are down by roughly 36%, while synthetic fiber underwear had a 29% decrease. Woven shirts for men and boys were down 28% as well. (Textile Outlook International)

#18. There are currently 73 items and seven textiles that experienced a lower import duty rate under the Most Favored Nation status that went into effect on January 2019. (Textile Outlook International) 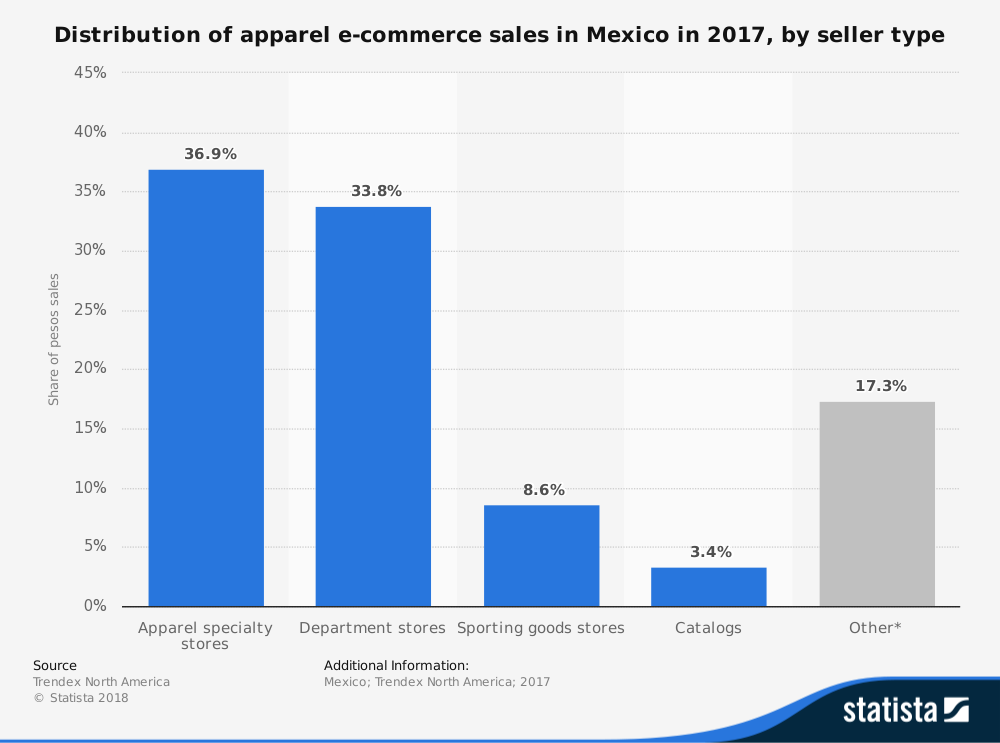 The Mexico apparel industry is expected to continue growing at a 7.5% clip through at least the year 2021. Depending on how economic circumstances pan out with the United States under the reformatted NAFTA deal, this figure could be much higher through 2026 as more trade opportunities occur for the country.

There is also a significant risk to consider for this industry. Although compensation rates in Southeast Asia are rising, the minimum wage offered in Bangladesh and India is much lower than what Mexican workers earn for similar work. As the domestic industry continues to grow, international opportunities for exports may shrink as pricing takes Mexico out of the global market.

Niche market segments will continue to thrive in Mexico as they do in the United States as the value of items continues to increase. Expect the industry to continue benefiting from a favorable exchange rate with the U.S. dollar, but with most of the influence occurring with their northern border than any other trade partner.