Located along the Pacific Ocean, Ecuador is found in the northwest portion of the South American continent. Its name is reflective of its location along the equator of the planet. Fishing has always been part of the local culture because of this geographic location.

The reason why the fishing industry is so strong for this country is because there are two major ocean currents which come together at this location as well. The El Nino current meets the Humboldt Current, creating a blend where cold and warm waters come together. This creates an abundance of sea life that thrives within the nutrient-rich waters.

Much of the industry is focused on shrimp and tuna. Sport fishing opportunities for marlin contribute to the industry as well. With warm bays and a natural infrastructure to support aquaculture, the Ecuador fishing industry is one of the strongest economic drivers of this small nation.

#1. Tuna is the primary product offered through the Ecuador fishing industry. About 150 vessels 24m in length or longer are part of the industry, with about 60% of them being purse seiners. (Seafish Industry Authority)

#2. In 2014, the industry exported $2.9 billion in fish products, making it the second-largest exporter of seafood in the region behind Chile. (Seafish Industry Authority) 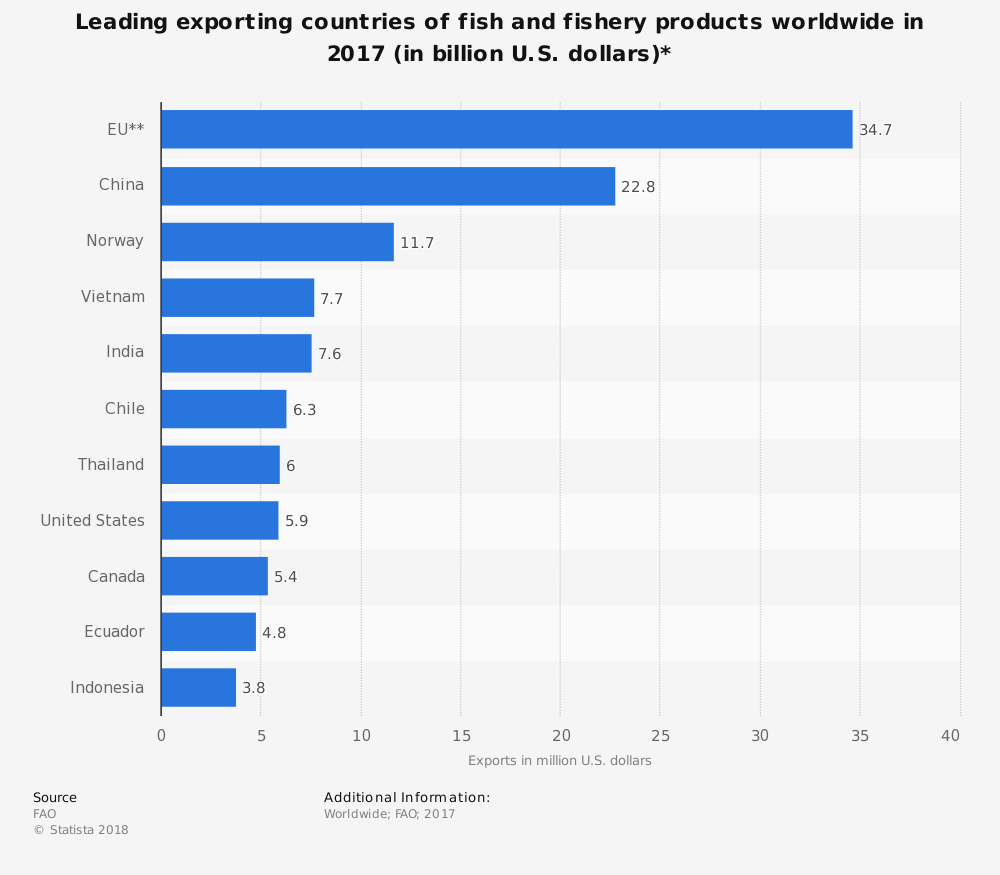 #3. Fishmeal exports from the industry generate about $116 million. Shrimps and fish combine to make up 11% of the exports Ecuador produces each year. (Seafish Industry Authority)

#4. The Ecuador seafood industry is the second-largest exporter of shrimp in the world today. More than 20 shrimp products are available for export each year. (Seafish Industry Authority)

#7. In 2001, there were about 61,000 people employed by the Ecuador fishing industry. It is estimated that up to 100,000 people could be working in the industry right now, though no recent figures have been released. (Food and Agriculture Organization)

#8. Women make up just 10% of the employees within the industrial sector for the Ecuador fishing industry. In packing and processing plants, however, women hold a majority of the employment positions. (Food and Agriculture Organization)

#9. About 95% of the aquaculture that is available through the industry in Ecuador relates to shrimp products. The remainder is primarily dedicated to tilapia. A few small-scale shellfish and freshwater fish, such as rainbow trout, are present as well. (Food and Agriculture Organization)

#10. Ecuador produces about 500,000 metric tons of tuna for export each year. This includes black skipjack, bigeye, and yellow fin. The tuna sector, on its own, is responsible for about 40% of the employment available within the Ecuador fishing industry. (U.S. Department of Agriculture)

#11. The total value of the tuna exports to the United States from Ecuador total $118 million. This figure is based on unprocessed frozen and fresh tuna or tuna products. (U.S. Department of Agriculture)

#12. Ecuador is the third-largest producer of tuna products in the world today, with $1.4 billion generated in tuna products annually. Only Thailand and Spain have larger markets. (U.S. Department of Agriculture)

#13. About 53% of the individuals who are employed in tuna processing plants are women. (Ministerio de Comercio Exterior)

#14. Ecuador ranks 6th in the world today in terms of total tuna captures from all oceans. From 2010-2015, this represents 7.06% of the total number of tuna caught globally. (Ministerio de Comercio Exterior)

#15. 60% of the exportable supply of tuna and its processing centers are located in Manabi. About 500,000 tons of raw tuna can be processed annually by the industry. Artesian fisheries are able to process another 3,000 tons of seafood products for the industry annually. (Ministerio de Comercio Exterior)

#16. 49% of the tuna exports which originate from Ecuador involve generalized canned tuna. Another 9.4% of exports are canned skipjack tuna in water and salt, with another 9.1% being canned skipjack in oil. About 141,000 tons of canned tuna are exported annually. (Ministerio de Comercio Exterior)

#17. Tuna loins are another top export for the industry, with 45,000 tons exported in 2016 to global markets. (Ministerio de Comercio Exterior)

#18. There are over 230 fishing villages and ports located along the coast of Ecuador. (University of British Colombia.

Even with heavy levels of fishing and commercialization, the fishing industry in Ecuador continues to thrive. It benefits from a tropical location and a favorable ocean location where cold and warm water currents come together. As the waters mix, nutrients reach both biomass types, and that creates enormously favorable fishing conditions.

There have been declines in the fishing sector, especially within the tuna industry, since 2015. Price instability has driven profits for the Ecuador fishing industry to lower-than-expected levels. Declines in exports to major trade partners has created an excess of supply that was unexpected. Although new customers have stepped forward to offset losses, there is still a high level of uncertainty found in the market.

Pricing is the primary challenge facing this industry today. As other markets get involved with tuna exports, the higher levels of supply and competition drive prices downward for the industry. With some countries reducing their orders at the same time, a perfect financial storm has hit the industry as well. Lower profits mean fewer jobs in the country and that trend will continue unless the industry increases production capacity or other tuna producers reduce their outputs.