All mining activities in South Africa suffered in 2016. As a whole, the industry suffered a 4% decline during the year, which was the steepest decrease since the 2009 global recession hit. Only diamond production was able to see growth during that year.

Coal is a central component of South African mining. The South African coal mining industry is responsible for 28% of the total mineral sales which occur during the average year, which leads the mining sector. Platinum follows in second, with 21% of all sales, followed by gold at 15% of total sales.

Despite leading in total sales, the growth in production for coal in South Africa was just 0.5%. In comparison, manganese mining production grew by 32%.

Mining is important to the overall economy in the country in several ways. It contributes 8% of the revenues that are produced for the national economy and employs 2.5% of the overall workforce. 1 in 40 people in South Africa are miners.

#1. Particulate matters and emissions have decreased by 90% over the last 35 years within the South African coal mining industry. (Creamer Media)

#2. The coal industry in South Africa provides over 6% of the total merchandise exports produced for the country each year. About 69 million tons of coal are processed through the Richard’s Bay Coal Terminal each year. (Universal Coal) 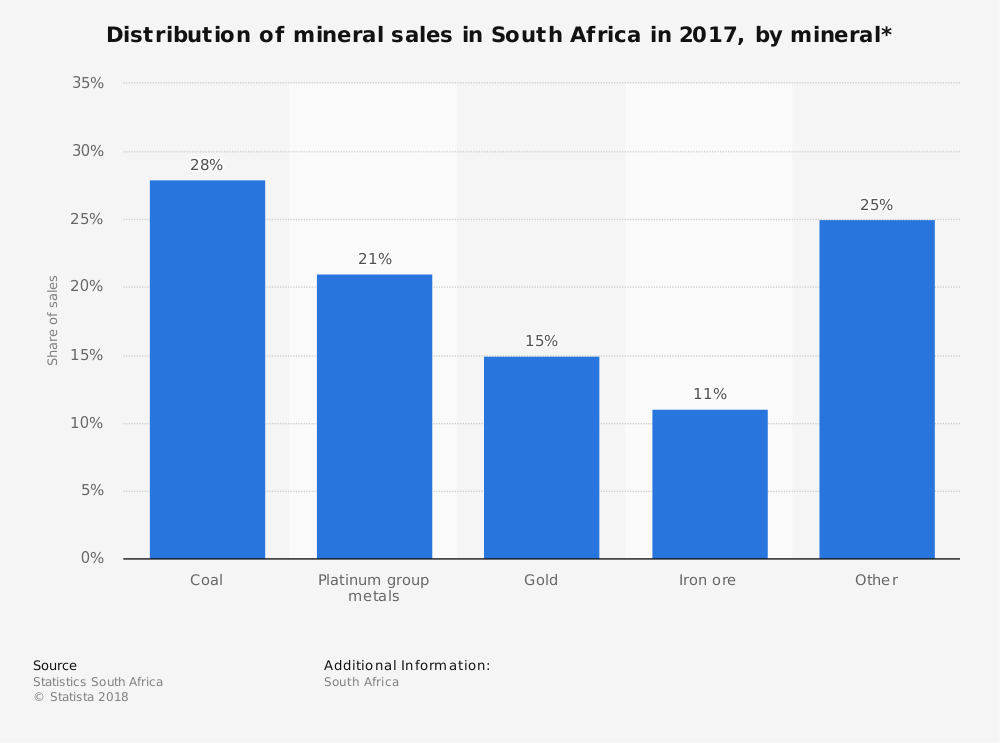 #3. With over 31 billion tons of recoverable coal reserves that are verified, the South African coal mining industry is the sixth-largest holder of coal in the world today. (Universal Coal)

#4. 11% of the world’s total coal reserves are currently located within the borders of South Africa. (Universal Coal)

#5. The 8 largest coal mines that are currently operational in South Africa produce over 60% of the coal that is mined each year. Over 53% of the coal comes from open-cast mining methods. (Universal Coal)

#6. 77% of the energy needs in South Africa are currently met by coal that is produced by the industry, with 83% of that coal being mined in Mpumalanga. (Universal Coal)

#8. Kumba Resources Ltd. is responsible for 85% of the saleable coal production which occurs in South Africa each year, along with Sasol, Ingwe Collieries Ltd, Anglo Coal, and Eyesizwe. (RSA Department of Energy)

#9. More than 65 million tons of coal discards are produced by the mining industry each year. (RSA Department of Energy)

#10. Total revenues generated by the coal mining industry in South Africa totaled R119 billion in 2019, which was R14 billion more than the year before. A majority of the increase in revenues came from pricing differences since production levels were flat. (PwC Research Network)

#11. In the first half of 2017, the mining industries in South Africa reported 38 fatalities. Only 4 of them were attributed to the coal mining sector. (PwC Research Network)

#12. 61% of the coal that is produced by the industry each year is sold to Eskom. (PwC Research Network)

#13. The coal which is produced in South Africa is ranked the highest in terms of foreign exchange earnings that are generated in the country. Over 200 major chemicals, for thousands of carbon-based products, are based on what the coal industry is able to provide. (XMP Consulting)

#14. 40% of the diesel and gasoline requirements for South Africa are met because of the activities of the South African coal mining industry. (XMP Consulting)

#15. Over 300 million tons of coal are produced from run-of-mine operations by the industry each year. Of that amount, two-thirds immediately go to the washing process, while the remainder goes to screening, which is where the discards wind up as well. (XMP Consulting)

#16. Electrical use of coal in South Africa creates a demand of more than 128 million tons each year. Over 90 million tons of this need is met from screen resources. (XMP Consulting)

#17. Coal that is used for electricity fetches the lowest price for the coal industry, at just R223 per ton. In comparison, coal exports fetch a price of R691 per ton. Metallurgical coal fetches the highest price, at R814 per ton. (XMP Consulting)

At the current production levels, assuming that no new coal deposits are found within the country, there are about 50 years of coal supplies left that the mining industry can access. With 62% of the coal being used for electricity generation and 23% used for the domestic petrochemical industries, time is running out for the South African coal mining industry.

Even though it is consistently responsible for more than one-quarter of mining industry revenues for the country, we are just two generations away from having this resource disappear. Without new energy resources being developed, South Africa will be forced to import the coal they require.

One way to reduce coal usage immediately would be to develop alternative electricity generation capabilities. By reducing electrical consumption of coal by 50%, the current supply could be extended another 15 to 25 years.