The early days of the hearing aid industry involved franchisees representing specific products to consumers. You could find their booths in shopping malls, commercial properties, and the occasional large retailer, such as Costco or Sam’s Club. Although the cost of these early technologies was high, it was a way for people to restore their hearing without much effort.

Now the industry has evolved to provide more opportunities for truly independent sellers who are not bound by exclusive contracts. Roughly 26% of industry revenues occur through these locations. Many operators often think they operate independently, but if they are a vendor or do not have full decision-making power over the products they represent, then they do not qualify for this distinction.

There are drawbacks to consider when becoming an independent operator for the hearing aid industry. The prices charged to consumers are likely to be higher than what would be available to consumers at Costco, CVS, or another retail store or chain. This issue occurs because small independent shops cannot order in bulk like larger providers, which means there are fewer discounts available.

#1. Hearing aid sales grew by 3.4% in the United States in 2017, with a 4% growth rate in the private and commercial sector leading the way. There was also a 0.92% growth rate experienced in sales directly attributed to the Department of Veteran’s affairs. (The Hearing Review) 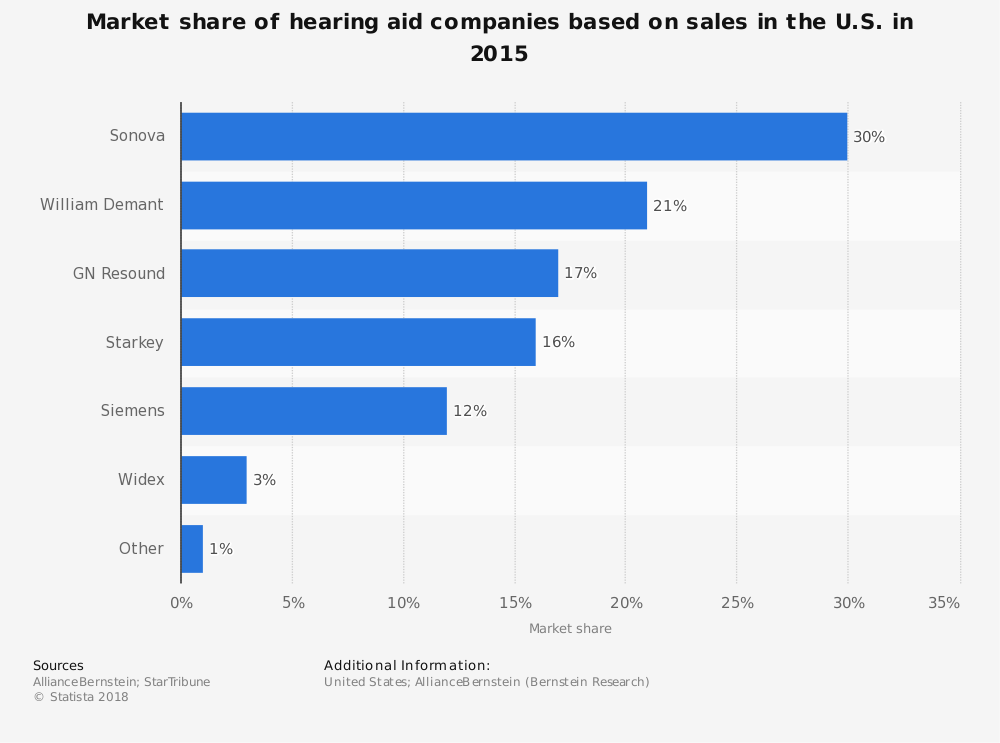 #3. A majority of the hearing aid industry has transitioned to independent dispensers instead of the franchises that were creating revenues in the early days of this technology. 52% of revenues in the United States occur through independent retailers, small chains, and other buying groups for these representatives. Costco represents 12% of the industry, while Beltane and Amplifon represent 7% each. (Hearing Health and Technology Matters)

#4. 78% of the hearing aid sales which occur in the United States are through private sellers. The remainder of the revenues occur through sales that occur through the Department of Veteran’s Affairs. (Hearing Health and Technology Matters)

#5. The top six companies in the hearing aid industry represent 98% of the global market. These companies are Widex, Starkey, Sonova, William Demant, Sivantos, and GN ReSound. The first two are private companies, so data is not always readily accessible from them. (Hearing Health and Technology Matters)

#6. Since 2013, the hearing aid industry in the United States has grown by 3.4%, reaching a total revenue level of $2 billion. During that time, the number of businesses active in the industry have remained stable while employment opportunities have risen by almost 2%. (IBIS World)

#7. The 4,368 business which are currently active in the United States for the hearing aid industry have experienced an annual average 3.4% rate of growth since 2013. (IBIS World)

#10. Receiver-in-canal hearing aids represent over 72% of the industry market in the United States. Behind-the-ear aids represent 12.6% of the revenues. (The Hearing Review) 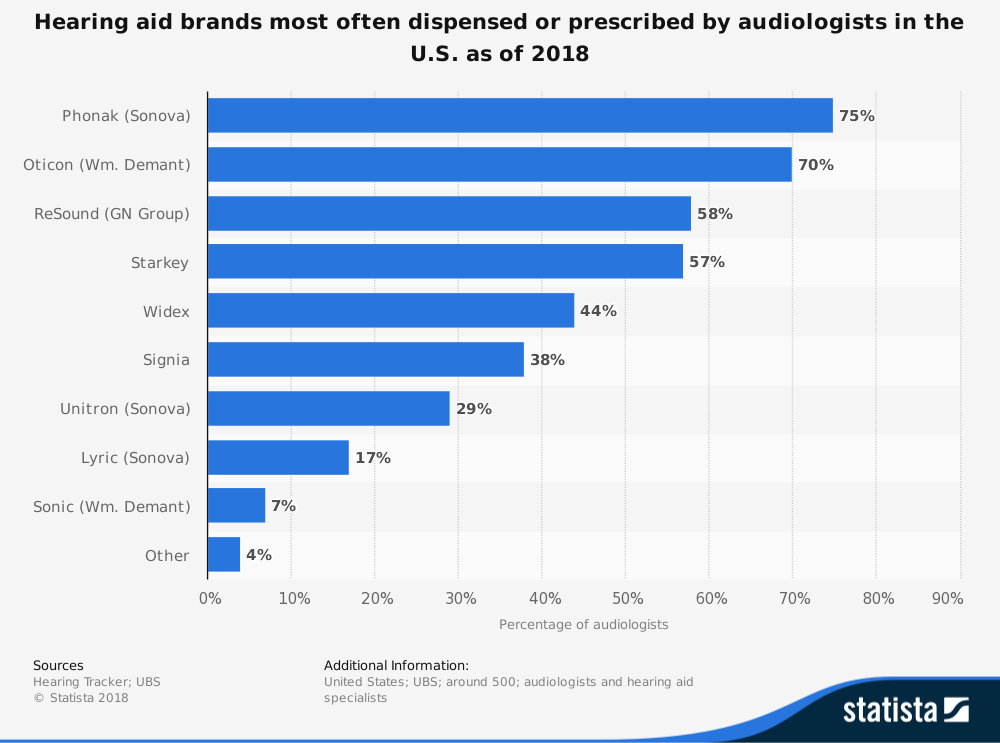 #11. Almost 85% of the hearing aids sold in the United States are of the BTE style, which means 5 out of every 6 consumers who use this product are purchasing this particular model. (The Hearing Review)

#12. Wireless hearing aids now represent over 91% of the products which are sold in the United States. 99% of the RICs are now wireless, whereas 86% of the ITCs and ITEs include this technology. Approximately 65% of the traditional CICs and BTEs are classified as being a wireless technology. (The Hearing Review)

#13. 84% of consumers purchase a pair of hearing aids instead of buying a single product. Over 50% of customers said that they believed they were purchasing a top-end product from an industry provider. (Hearing Tracker)

#14. 18% of consumers in the United States who work with the hearing aid industry say that their hearing loss is “profound.” Another 31% report that they have “severe” hearing loss in one or both ears. (Hearing Tracker)

#15. The average price for a hearing aid in the United States is $2,560 when purchasing them individually or $2,336 when buying them as a pair. That is why the house brand from Costco is such a popular product, since the average price of Kirkland hearing aids is $963 each. (Hearing Tracker)

#16. Sonova is the most popular hearing aid brand in the United States, representing 30% of the American market in 2015. (Hearing Tracker)

#17. 75% of the hearing aids that are purchased today are bought and fitted through audiologists. Another 20% of consumers work with hearing-instrument specialists. (Hearing Tracker)

It is always a challenge to gauge how strong the hearing aid industry is each year because there are some merchandisers, such as Costco, which do not report their sales statistics. Assuming that the growth rate of the industry has been consistent in years before 2017, the retail sector could represent as much as 15% of the industry.

The evolution of technologies for the hearing aid industry is one of the most significant assets that contribute to the growth of revenues. Numerous products are much smaller than they were in the past, creating repetitive customer opportunities. New advancements allow people who may not have qualified for hearing aids in the past to benefit from new hearing opportunities.

We expect the trends seen in the U.S. and around the world to continue over the next 5-year forecast period ending in 2024 for the hearing aid industry. The number of firms will continue to remain relatively static thanks to the availability of bulk suppliers in major metropolitan areas. Look for a 4% average growth rate to be available as employment opportunities continue to surge forward as well.