The gasket industry is responsible for the manufacturing of gaskets and seals. Packing devices are included with the information provided by the industry as well. These items may be manufactured and used with all material types, including metallic, non-metallic, and molded materials.

Gaskets are a mechanical component. They are used to create a seal at a point of connection when two pieces of equipment are in operation. Many of the components used in homes, businesses, and industrial locations use components which are manufactured by this industry. That is because a gasket allows for two imperfect mating surfaces to come together because the product is able to fill in the gaps which are caused by their irregularities.

Gaskets are often manufactured using a variety of different materials, allowing the product to respond to different pressures and temperatures. Some gaskets even respond to changes in electromagnetic pulses received.

#1. In the United States, the gasket industry, when combined with seal manufacturing, generates about $8 billion in revenues annually. (IBIS World)

#2. Over the 5-year period ending in 2017, the industry grew at an annualized rate of 1.1%, which has helped to keep profit margins stable for the firms operating within this sector. (IBIS World) 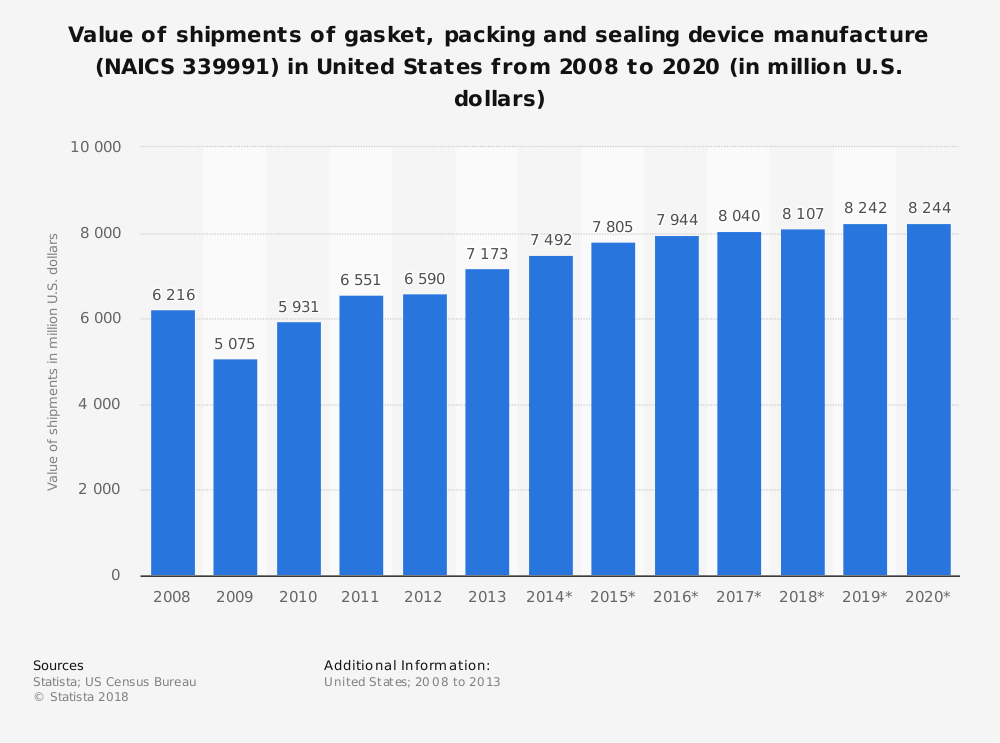 #3. There are currently 581 firms active in the U.S. market for the gasket and seal manufacturing industry. Together, these firms directly employ about 30,000 people. (IBIS World)

#5. Machinery takes up the largest share of the end-use needs for the gasket industry, accounting for 33.4% of all sales in 2016. This is followed by automotive uses, electrical and electronics uses, and the aerospace sector. (Future Market Insights)

#6. The global automotive gasket and seal market could be worth as much as $12.36 billion by 2020. Asia-Pacific is the strongest region of growth for the industry outside of North America, with an anticipated CAGR of 7.06%. (Markets and Markets)

#7. The European market for gaskets and seals is based on the OEM footprint of the automotive industry. It is projected to grow with a CAGR of 6.42% through at least 2020. (Markets and Markets)

#8. The global gaskets and seal industry is valued at more than $54 billion. In 2014, the world market was forecast to see demand levels rise by 5.3% annually through 2019. Which would create revenues of $70.8 billion. (Freedonia Group)

#9. The electrical and electronics segment of the gasket industry is expected to see the fastest levels of growth, rising 5.2% per year as a total global segment. (Freedonia Group)

#10. With total values exceeding $16 billion, the Asia-Pacific region will see emerging economies drive up market demands, which may influence global pricing structures within the industry. (Technavio)

#11. One of the primary materials used by the gaskets and seals industry is rubber. The total rubber production levels worldwide, including natural and synthetic products, totaled 27.2 million metric tons in the last year. (Statista)

#12. About 12.4 million metric tons of rubber is produced annually, with about 45% of that production occurring within the Asia-Pacific region. The APAC region is also the largest synthetic rubber producer, responsible for 3.9 million tons of product. (Statista)

#13. In the automotive industry, 67% of the gaskets and seals that are produced for U.S. consumers are used in light vehicles. Another 30% are manufactured for commercial vehicle operations. The remainder is dedicated to OE service sets. (The Firestation Group)

#14. In just one manufacturing facility in Illinois, Fel-Pro is able to manufacture 300,000 gaskets per day. This figure does not include the use of 45 injection-molding presses, along with proprietary formulations, to create over 35,000 molded rubber sealing products as well. (The Firestation Group)

#15. The U.S. shipments listed for the gasket and seal industry totaled $6.1 billion in 2000. That figure is almost triple the value of shipments which were shipped in the 1980s. (Reference for Business)

#16. When the gasket and seal industry reached a low point of just over $5 billion in 2009, the last time revenues were that low for the industry was in 1999, when the total value was $5.37 billion. (Reference for Business)

#17. Total industry employment within the manufacturing sector of the gasket industry in the United States has stayed relatively stable since 1998. Only 2,000 total jobs have been reduced within the industry, even with manufacturing and productivity improvements. (Reference for Business)

In past years, asbestos was often used by the gasket industry for manufacturing products. The material, which is abundant and uniquely fibrous, was even woven into cloth and rope materials. At its height, sheet gasket materials would often contain up to 80% white asbestos. After discovering the dangers of this mineral, the gasket industry began to shift its manufacturing processes.

It is at the time of this shift that the revenues generated by this industry would finally begin to grow consistently as well.

In 2010-2013, the forecasts for the gasket industry predicted growth levels that would help the industry achieve revenues of $10.6 billion by 2018. Although those predictions over-estimated the strength of annualized growth, the revenue trends for the industry have been positive.

As advanced materials make their way into the industry, expect products to have higher profit margins and longer lifespans, generating new interest for gaskets and seals. When combined with the growing global industrial sector, demand levels are expected to remain level, if not grow, even with innovative products on the market.

Through 2023, the annualized rate of growth may be as low as 0.4%. Should that level of growth occur, the revenues generated may still fall short of the predictions made nearly a decade ago. Even so, the trend is still upward for the gasket industry and nothing seems to be holding it back.