The birth of the audiobook occurred in 1931. In that year, the American Foundation for the Blind worked with the Library of Congress to establish the Talking Book Program through the Book for the Blind Project. The first audio recordings that were used as a test for this new product included a chapter from Midstream, which was written by Helen Keller.

By 1934, the Talking Book Program has created audiobooks for Shakespeare’s plays, the Bible, and the Declaration of Independence.

It wouldn’t be until the 1950s, when record companies began distributing albums for books, however, for the audiobook industry to begin taking shape. The invention of the cassette tape in 1963 helped to make audiobooks more accessible as well. Then, in the 1970s, libraries began to stock audiobooks for their patrons.

#1. People in the 25-34 age demographic are the most likely to listen to audiobooks in the United States. Although they make up 18% of the population, they represent 20% of all audiobook listeners. (Edison Research) 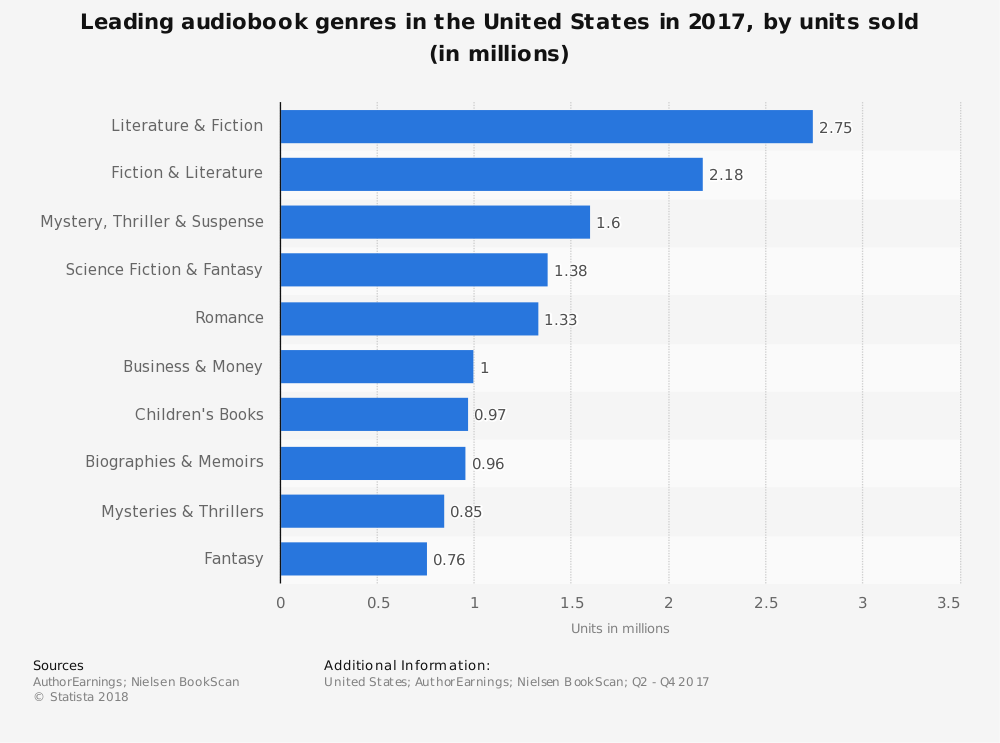 #3. The United States is the largest market in the world for audio format books, with $2.5 billion in sales registered in 2017. That represents a $400 million increase in revenues from the year before. (Audiobook Publishers Association)

#4. 26% of the U.S. population stated that they had listened to at least one audiobook within the last 12 months. (Audiobook Publishers Association)

#7. 68% of those who say that they frequently listen to audiobooks do so while they are doing housework. That outranks listening to audiobooks while baking (65%), exercising (56%), and crafting (36%). (Edison Research)

#8. 30% of people who listen to audiobooks regularly say that they use a voice-enabled wireless speaker, such as Google Home to access their product. (Edison Research)

#9. The audiobook publishing industry in the United States is responsible for the direct employment of about 4,400 people each year. (Statista)

#10. About 77% of the audiobook sales which occur every year involve a fictional work. (Statista) 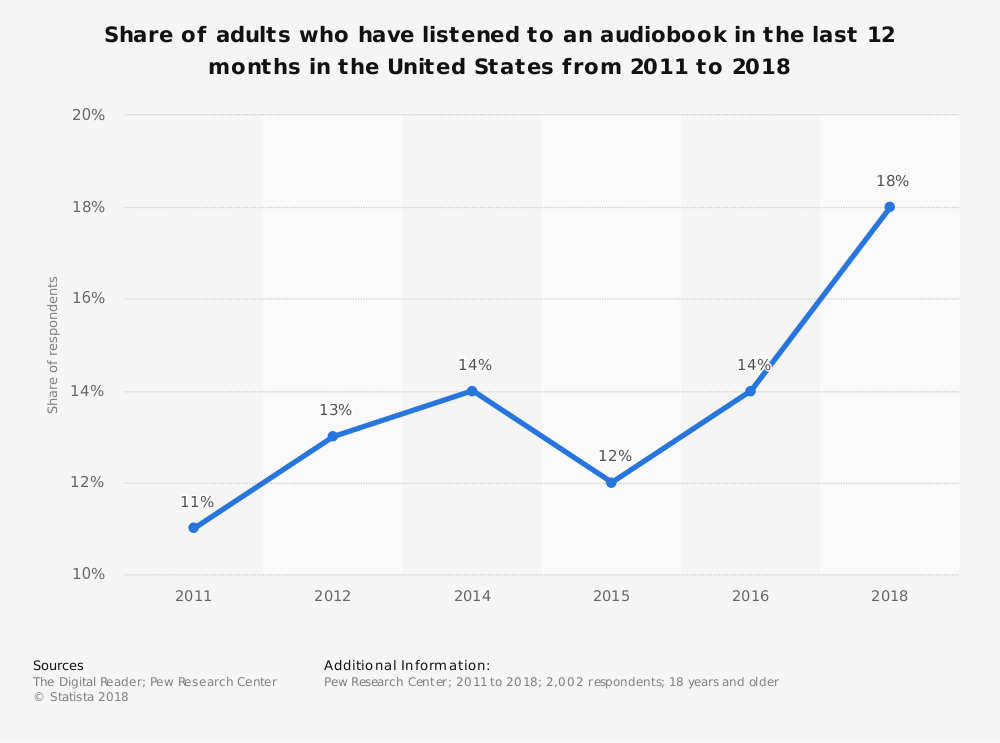 #11. Young adult and children’s audiobooks account for over 10% of industry sales on the average year. In total, about 18% of youth in the United States will listen to an audiobook at least once over the course of a year. (Statista)

#12. 56% of people who listen to audiobooks on a frequent basis, defined as 4 audiobooks or more in the last 12 months, are men. In terms of general audiobook listening, however, women are 52% of the market. (Audiobook Publishers Association)

#14. 77% of people who self-identify as a frequent audiobook listener say that listening to audiobooks helps them be able to finish more books. (Audiobook Publishers Association)

#15. 56% of people who listen to audiobooks say that when they listen, they prefer to not be doing anything else. They prefer to just stop and listen to the book. (Audiobook Publishers Association)

#16. The most common way to purchase an audiobook is to use Amazon, Audible, or iTunes to download a digital audio file. 38% of consumers use that method for purchase. Another 20% say that they downloaded their audiobook from a library, while another 20% said that they found their last audiobook on YouTube for free. (Audiobook Publishers Association)

#17. In 2016, there were 43,000 titles produced in the audiobook format. The three most popular genres were mysteries and thrillers, science fiction, and romance. (Audiobook Publishers Association) 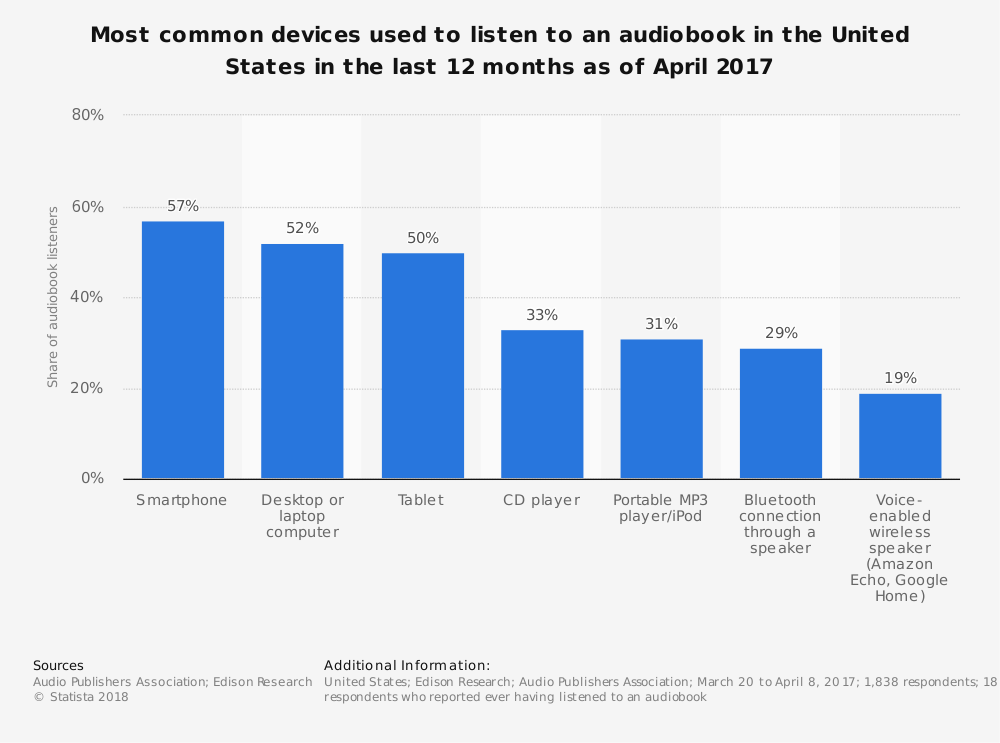 The main channel for access to audiobooks continues to be the local library. Borrowing from local libraries has become much easier in recent years, as a library card allows for digital rentals of certain files. That means users are able to access new audiobooks from the comfort of their own home, without the need to go to their local library to check out the file.

Although the consumer base for the audiobook industry is small, with most of it located in the United States, it is still growing. More people are discovering that they can listen to their audiobooks on multiple devices, which has increased the popularity of this medium. New technologies for the home or in vehicles makes it easier to use digital files as well, which increases consumer access for this industry.

For these reasons, expect the audiobook industry to continue an upward path of growth in the coming years. Although sales will not likely top $5 billion for the global industry in the next 10-year period, expect to see double-digit percentages in growth happen in the coming years