Home » Pros and Cons » 17 Advantages and Disadvantages of Electoral College

The Electoral College is a body of delegates which represent each state within the United States. They are selected to provide votes on behalf of how their state population voted in a presidential election. Each state is permitted to determine how delegates are assigned and how they should vote to finalize the presidential election every 4 years.

When the Founding Fathers created this voting system, it was done to ensure that every geographic region, regardless of their size, could have a say in how the government of the U.S. was formed. Without the Electoral College, states like California and Texas would have more influence in the government than states like North Dakota, Vermont, or New Hampshire.

Here are some of the key advantages and disadvantages of the Electoral College to think about and discuss.

List of the Top Advantages of the Electoral College

One of the biggest complaints that comes out of any election is that a voter feels like their vote does not count. In a popular vote, that often occurs if a voter frequently finds themselves in a minority position. Because of the Electoral College, rural voters are able to come together to vote, just as urban and suburban voters do. Each voting group receives the same chances at having their voices heard in the election. Without this process, the largest states would often influence the elections because they would have a majority of the available votes.

2. It requires a candidate to receive popular support in more than one region.

The goal of the Electoral College is to prevent one geographic region from having an undue effect on presidential elections. There are certain states in the U.S. that traditionally vote for one party or the other. There are also some states that may vote differently in each election. There is no guarantee, however, that any state will vote a certain way. For that reason, candidates must meet with voters throughout the country to talk about core national issues. Securing the support of one region won’t provide enough electoral votes.

3. It allows people outside of the majority to express their opinion.

Because regional support must be obtained by candidates, local issues can reach the national spotlight in political conversations because of the Electoral College. Along the East Coast, mining and coal energy might be a top priority. Along the West Coast, renewable energy and tax incentives for tech companies might be the top discussion points. Because candidates must garner nationwide support, they are forced to listen to all viewpoints of the populace. That makes it more difficult to force the minority to always follow the positions of the majority.

4. It simplifies the available choices in an election.

In the United States, anyone who is qualified to run for the office of the presidency can get themselves placed onto a ballot. There are certain rules which must be followed to make that happen, though there are few restrictions. Even when Ross Perot won 18% of the popular vote in 1992, however, he didn’t win a single electoral vote. The last third-party candidate to win an electoral vote through vote distribution was George Wallace in the 1968 election. By putting the election through the Electoral College, it simplifies the selection process for voters.

5. It is a Constitutionally-approved election method.

When the Founding Fathers created the Constitution, they curiously didn’t give voters in the country the actual right to vote as a way to choose their president. They left that power to the electors who meet in each state to cast ballots. Those electors are chosen in a manner that is left to each state. To ensure that votes do count, the states have created systems which are based on local vote outcomes. Then the ballots are cast for the state, based on the rules in place, to create an outcome which usually reflects what the actual vote happened to be. Whoever gets to 270 electoral votes first is then who wins.

Although not everyone is fond of the “us vs. them” format of the Electoral College, it does provide a societal advantage in that it requires each political party to adopt a generalized platform. That creates momentum towards centrism and moderate cooperation, instead of allowing extremism to creep into political discussions. That may reduce the number of specific issues that are addressed in the national election, allowing local officials to be responsible for local issues.

7. It maintains the representative government.

The United States is often described as a democracy. That is an inaccurate representation. The government is actually a federal republic. Voters elect people to represent specific areas of the country within the government. The president, federal courts, and Congress all share powers that are reserved to the federal government, while sharing sovereignty with each state at the same time. The Electoral College helps to support this framework by allowing voters to have choices over who represents their needs at each level of government.

8. It still promotes the idea of the simple majority. 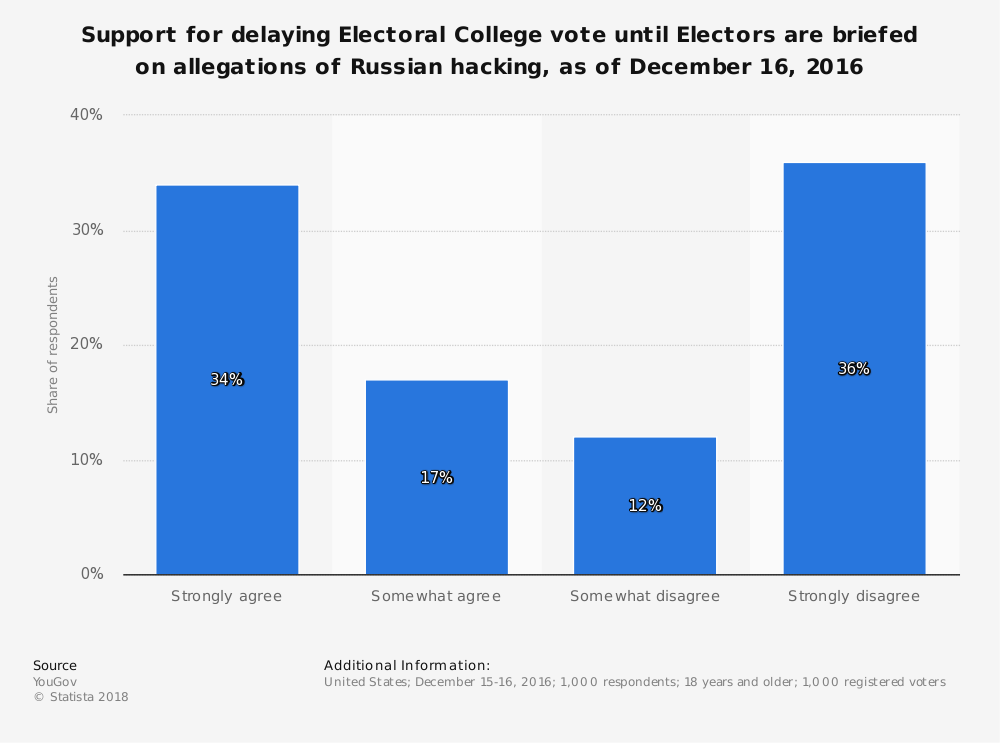 List of the Top Disadvantages of the Electoral College

1. It does not always promote fairness.

For the 6 months leading up to the 2016 election, polls consistently placed Hillary Clinton more than 10 points above Donald Trump in Washington State. As the election drew closer, those who preferred Clinton over Trump continued to increase. For those who planned on voting for Trump, they would feel that their vote wasn’t going to count because the majority of people in their state weren’t going to vote for him. That creates a disparity in true representation.

2. It does not require a majority vote of the population.

Bill Clinton, Donald Trump, and George W. Bush share something in common: none of them received a true majority of the vote. With Bush and Trump, they were beaten by their opponent in the popular vote. Because they won more electoral votes, however, they were elected to the presidency. In the case of Clinton, he did win the most votes, but because of Perot’s 18%, his total vote count was below 50% for the election. As long as someone receives a majority of the electoral college, they get to be president.

3. It creates a result that may not be the will of the people.

The 2016 presidential election saw a record number of faithless electors cast ballots for someone other than the person whom voters chose with their votes. Washington State had 4 faithless electors, while Texas had two and Hawaii had one. If someone receives just 1 electoral vote, they can be chosen to be president if no one receives a majority of the electoral college. In the 2016 election, that meant Colin Powell, John Kasich, Ron Paul, Bernie Sanders, and Faith Spotted Eagle all could have chosen to be president, even though they weren’t on the actual presidential ballot.

4. It creates a system where margins do not matter.

5. It may encourage voters to stay home.

If a voter knows that their candidate is 30 points behind in the polls and not likely to win the presidential election, there is a chance that they may decide to stay home. That decision affects local elections as well, as most states include all choices for all offices on the same ballot. If voter turnout is suppressed on the local level because of the expected results within the Electoral College, then local governing may not reflect a true majority of the people either.

6. It is a complicated system.

The Electoral College redistributes votes every 10 years because of population movement. That means the number of delegates with each state changes after every 2 presidential elections in virtually all cycles. That means there is a level of unpredictability in the system that complicates the voting process for some voters. Each cycle means a state may gain or lose influence, based solely on the number of people who have moved there.

For the first time since 1868, California was given more than 10% of all the total electoral votes available in the U.S. on the last electoral assignment evaluation. At the time of this writing, there are 55 delegates assigned to California. When combined with Oregon and Washington, both states which generally vote for Democratic candidates, there are 74 electoral votes already accounted for before an election even begins. Being a Republican in those states makes it difficult for their voice or desires to be heard on the national level.

8. It can give smaller states more voting power.

9. It only applies to the presidential election.

No other election in the U.S. is forced to go through the Electoral College. It is a system reserved for only the president and vice-president. Local elections do not follow a similar system.

The advantages and disadvantages of the Electoral College are important to evaluate as the U.S. moves toward the 2020 election and beyond. Democrats have won the popular vote in 2 out of the past 5 elections, failing to put their candidate into office because of Electoral College rules. By evaluating each key point on its merits, we can decide together if this political system should stay, or if it should go.