Pakistan is currently the eighth-largest producer of textile products in Asia. Textiles contribute about 8.5% to the total GDP of the country each year. More than 15 million people, or about 30% of the total workforce in Pakistan, is employed somehow in the textile trade. The industry is currently comprised of more than 1,200 ginning units, 440 spinning units, and 124 large spinning units.

Pakistan is also the 4th largest producer of cotton products and is the fourth-largest consumer of cotton as well.

In 2018, the Pakistan cotton industry maintained this static trend, producing 8.5 million bales, which was 3.66% higher than production rates from the year before.

Some of the statistics presented by the cotton industry in Pakistan are included in the overall textile industry reports as both industries are often reported together.

#1. About 95% of the cotton which is produced in Pakistan is the Bacillus Thuringiensis variety, or Bt cotton. It was first informally introduced to the cotton industry in the country in 2002. (U.S. Department of Agriculture)

#2. Pakistan is required to import medium staple cotton to augment its domestic supplies. Imports in 2015 were about 2 million bales to meet the needs of the textile sector in the country. (U.S. Department of Agriculture) 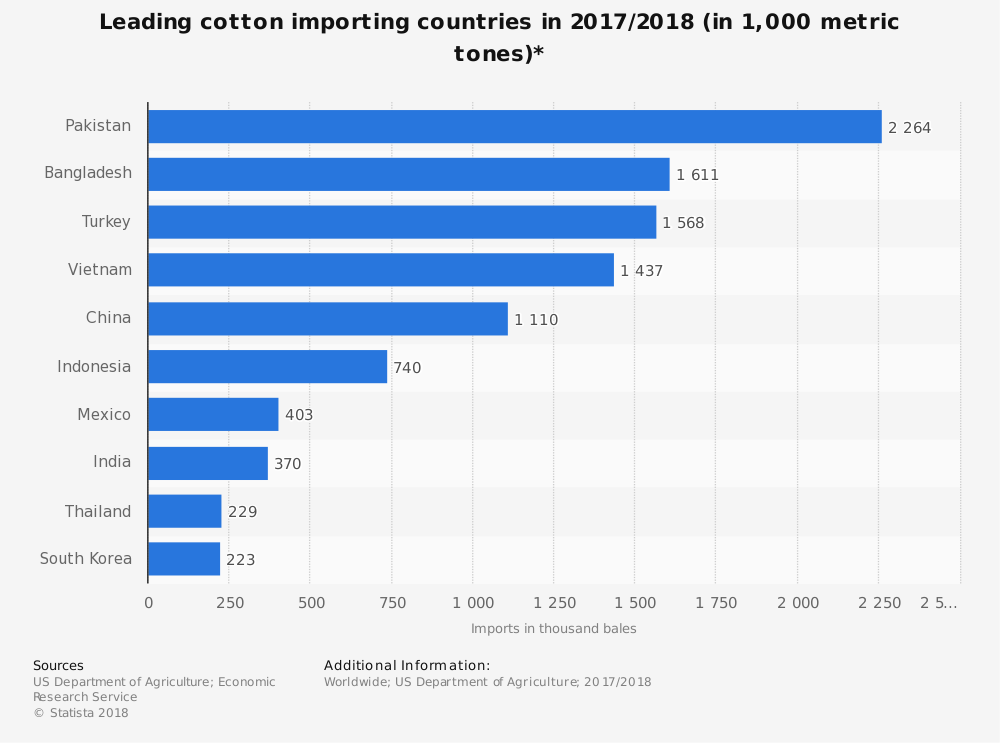 #3. Even with the imports happening, Pakistan also exports about 500,000 bales of cotton each year. (U.S. Department of Agriculture)

#5. About 2.9 million hectares of land are planted with cotton in Pakistan each year, with beginning stocks accounting for 2.475 million hectares. (U.S. Department of Agriculture)

#6. In 2015, the yield per acre for cotton in Pakistan was 723 pounds. That was just 4 pounds off the record harvest in the 2011-2012 growing season and is 6 times greater than the first recorded harvest in 1948. (Karachi Cotton Association)

#8. About 80% of the cotton that is produced in Pakistan comes from Punjab, with the rest produced in Sindh. About 1.3 million farmers are currently active within the Pakistan cotton industry. (International Cotton Advisory Committee)

#9. The Pakistan cotton industry contributes to about 5% of the world’s total global spinning capacity within the local textile industry, but Pakistan’s global share of textile trade is less than 1%. (The Express Tribune) 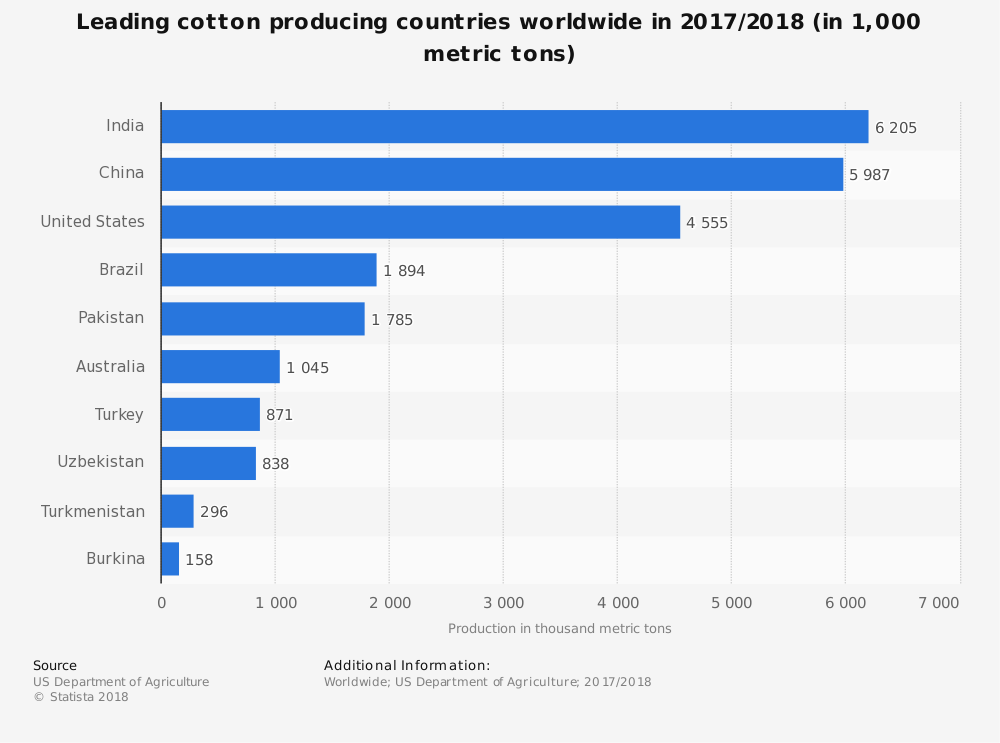 #11. There were 762 million square meters of cotton cloth produced in Pakistan in 2010, which was 25.2% less than what was produced the year before. (Horizon Securities Ltd.)

#13. Textile industry exports in Pakistan represent a 60% economic contribution in their sector, responsible for 46% of the manufacturing which occurs in the country, and about 40% of the employment opportunities. (Economic Survey of Pakistan)

#14. Although the global export value of textiles is more than $400 billion, Pakistan only holds an $11 billion share, which matches India, Bangladesh, and Indonesia. China and Hong Kong together represent over $90 billion in industry revenues each year. (RCCI)

#15. About 800 units have closed in the textile and cotton industries in Pakistan due to oil and gas shortages in the country. That represents about 500,000 lost employment opportunities within the country. (RCCI)

The cotton industry is Pakistan is heavily reliant on three external factors: weather, government policies, and regional conflict. Although the industry has seen general patterns of growth, the amount of cotton produced in the country has been relatively unchanged since the harvests in the mid-1990s.

Part of the reason for this is that farmers are able to produce more cotton per acre consistently than ever before. With the addition of biotech cotton, yields are consistently higher, even in years where performance levels would be poor. Because of this shift in the industry, more crop years are expected. Since 2010, 50% of the largest yields recorded in the history of the industry have occurred.

With textile exports on the rise in Pakistan as well, reaching an average of $1 billion per month, the demand for cotton will continue to rise. Look for the government to enact policies which will encourage more domestic growth, allowing for a reduction in import cotton and its costs to occur.

Over the next 5-year period, expect cotton growth to remain steady, as well as the number of farmers involved with the industry. Production levels will stay consistent, but values may increase, contributing to a greater percentage of the total GDP.